Cost of living hits Britons living off the grid 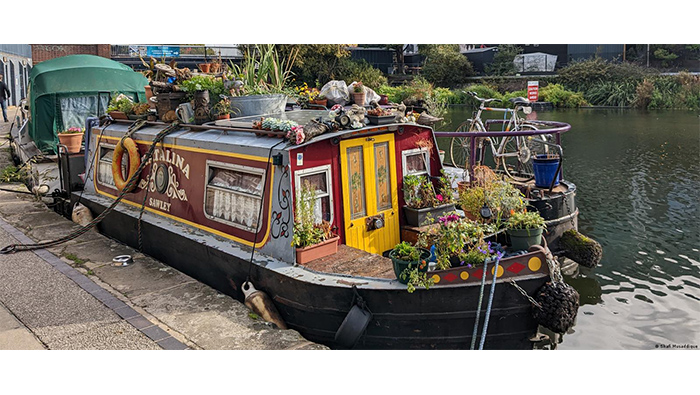 London: The scrapping of a UK government promise to keep energy prices below £2,500 (€2,875, $2,820) for two years has rung alarm bells for the growing number of Britons living off-grid in mobile homes such as boats, camper vans and cabins.

UK households will receive £400 towards their bills from October. By comparison, the German state is to pay this December's monthly gas bill for all households and small- and mid-sized businesses.

Those living off the grid, relying on bottled gas or petrol generators, say they will miss out entirely on any government energy support.

"People will be spending more on coal, logs and firewood than they would have done a year ago," Jack Saville, spokesperson for the National Bargee Travellers Association, a volunteer organization that provides support and advice for boat dwellers, told DW. He fears that, without access to fuel, there may be " dire consequences."

"There's a real risk for travelers and boaters of freezing on board," Saville said. "You're surrounded by 7 feet [2.1 meters] of freezing cold water in a punishingly cold winter."

Estimates suggest that between 25,000 and 1.5 million homes are powered off-grid in the UK, with at least 400,000 people set to miss out on financial help.

Some people purchased mobile homes during the pandemic in order to save money that would usually go towards paying high rents for small apartments, particularly in London where the monthly average rent costs £1,600.

"I can now save well over two-thirds of my income and focus on paying for heating in winter and the licensing costs for mooring my boat," Zoe Miller told DW. A painter by trade, she swapped her one-bedroom London apartment during the pandemic for a boat moored on a canal in East London.

Like many of her boating neighbors, she uses solar panels to generate energy, but mostly relies on gas cylinders and wood in winter months. Boaters and mobile nomads say the price of bottled gas has doubled in recent months, with some paying as much as £400 per month on gas alone.

That hike will particularly impact the 300,000 members of Gypsy and Traveller communities who live in caravan sites.

The Friends, Families and Travellers charity, which supports Gypsy and Traveller communities in the UK, is concerned by the "astronomically high energy costs" for people living in mobile homes.

"One of the key issues underpinning this is that many site owners (including local authorities) choose the electricity supplier, meaning site residents cannot shop around for the best energy price and often have to pay an additional handling charge," the organization wrote in an open letter to the UK government

Upwards trajectory nevertheless
Burnout and a growing desire among young people to own less is also driving many to adopt off-grid lifestyles despite the short term hurdles.

"People are having to get out of cities to get head space," Hector Hughes, co-founder of Unplugged Rest, a startup that offers off-grid rural cabins on the outskirts of London and a digital detox for clients who want to "switch off" by locking up their phones.

Inspired by a Himalayan retreat in September 2019 at which his phone was taken off him, Hughes believes a rise in chronic anxiety and "overstimulation" from "too much connectivity with devices" has contributed to a surge in people, "particularly millennials," seeking off-the-grid lifestyles.

For Steve Solmon, who has lived in a mobile van for seven years, traveling across Wales, a frugal life is a benefit of living off-grid.

He believes that mobile homes remain a cheaper and eco-friendly alternative to many conventional homes in Britain.

The United Kingdom has some of the oldest housing stock in Europe, with many residences built before the first thermal regulations were introduced in 1970, and unable to retain heat as easily as newbuilds.