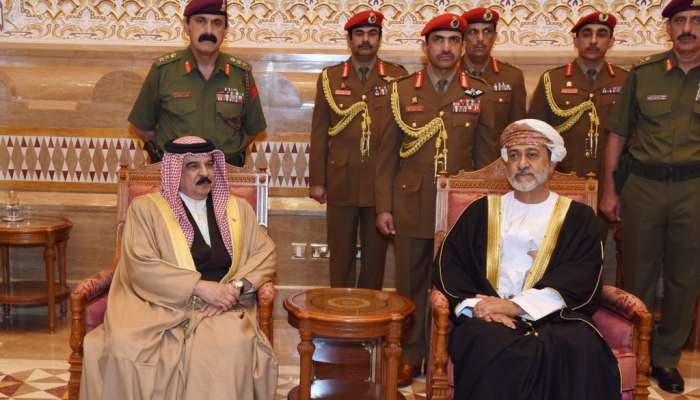 Muscat: Bilateral relations between the Sultanate of Oman and the Kingdom of Bahrain are based on solid foundations, framed by warm, stable and constantly enduring ties that are deeply rooted in history.

These relations, which extend to different political, economic, social and cultural domains, are accorded great attention by His Majesty Sultan Haitham bin Tarik and King Hamad bin Issa Al Khalifa of the Kingdom of Bahrain.

During the two leaders’ upcoming talks in Manama, the two countries aspire to take their relations towards broader horizons of cooperation in different fields, notably economic areas, to generate more benefits for their respective peoples.

In view of the exceptional bilateral relations, the Omani-Bahraini Committee has worked on a number of memoranda of understanding (MoUs) and executive programmes in cultural and tourism fields. It also coordinated between the Civil Service Employees Pension Fund in Oman and the Public Authority for Social Insurance in Bahrain. Coordination covered areas of civil retirement, youth and sports.

Oman and Bahrain enjoy many economic and tourism potentials that encourage more partnerships. The two countries’ visions (Oman Vision 2040) and (Bahrain Vision 2030) provide wide scopes for economic diversification, which open up opportunities for investment in sectors.

The number of Bahraini companies investing in the Sultanate of Oman reached 876, with a total invested capital of OMR566.2 million.

The private sector in the two countries also agreed during March 2022 to establish Oman-Bahrain Investment Holding Company with a capital of OMR10 million to be equally divided between Omani businessmen and their Bahraini counterparts. The company specialises in investing in the field of food security and existing companies operating in this field and in other sectors of importance to Oman Vision 2040.

In the cultural context, the Gulf Radio and Television Festival, which has been held every year in Bahrain for more than 40 years, takes credit for honing the skills of Omani intellectual, artist and media persons. Oman achieved advanced places in the past editions of the festival held in the Bahraini capital, Manama.

On 27 June 2022, the Embassy of Bahrain in Muscat celebrated the inauguration of the Omani-Bahraini Friendship Society, which will contribute to strengthening relations between the two countries in various fields of culture and cognitive development.

Oman, represented by the National Records and Archives Authority, and Bahrain, represented by Issa Cultural Centre will organise during May 2023, a two-day symposium to be entitled "Omani-Bahraini Relations: A Deep History and a Bright Future".