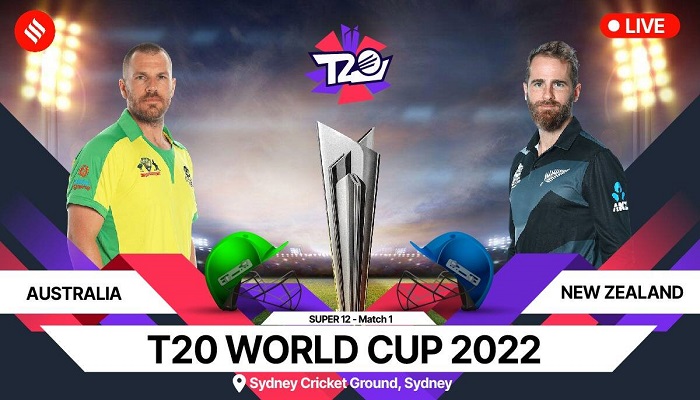 Sydney, Australia: New Zealand stunned holders Australia by 89 runs to get off to a winning start in the Super-12 stage of the ongoing ICC Men's T20 World Cup at the SCG on Saturday.

Opener Devon Conway was the star of the match as the Kiwis registered their first win on Australian soil since 2011.

After winning the toss, Australia captain Aaron Finch decided to field first. Opener Finn Allen and Devon Conway got the Kiwis off to a flying start. The two openers struck a quick-fire 50-run partnership. The two were scoring at a healthy run-rate before Josh Hazelwood cleaned up Allen to claim Australia's first wicket in the fifth over. Allen departed after scoring 42 runs in just 16 balls at a strike rate of 262.50.

Captain Kane Williamson then came out to partner Conway. The latter went on to complete his half-century as the two batters stuck around for a 69-run stand. Australia spinner Adam Zampa then caught and bowled Williamson in the 13th over, who departed after scoring 23 runs in as many balls. Glen Phillips departed soon, caught and bowled by Hazelwood, who claimed his second wicket of the day.

James Neesham came in and provided a final flourish for the Kiwis. He and Conway struck a 48-run stand as New Zealand finished with 200 for 3 on the board after 20 overs. Conway closely missed out on a T20 World Cup century, remaining unbeaten on 92.

Pacer Tim Southee provided New Zealand the start they wanted by getting rid of David Warner in the second over. Spinner Mitchell Santner added another wicket for the Kiwis, as he dismissed Aaron Finch for just 13 runs in 11 balls. Mitchell Marsh looked comfortable but couldn't take his innings deep with Southee striking again to claim his second wicket of the day.

Marcus Stoinis couldn't make much impact and departed for the pavilion after being dismissed by Santner. Hard-hitting Tim David was the next to fall as Santner picked up his third wicket. Pacer Lokie Fergusen picked his first wicket in the form of the dangerous Mathew Wade, who nicked the ball to the wicket-keeper.

Glen Maxwell tried to up the ante but spin bowler Ish Sodhi cleaned him up in the 14th over. Trent Boult then got rid of the tail-enders as Australia were bowled out for 111 in 17.1 overs, losing the match by 89 runs.

New Zealand will now face Afghanistan in their next match, while Australia lock horns with Sri Lanka in Group-1 of the Super-12 stage.