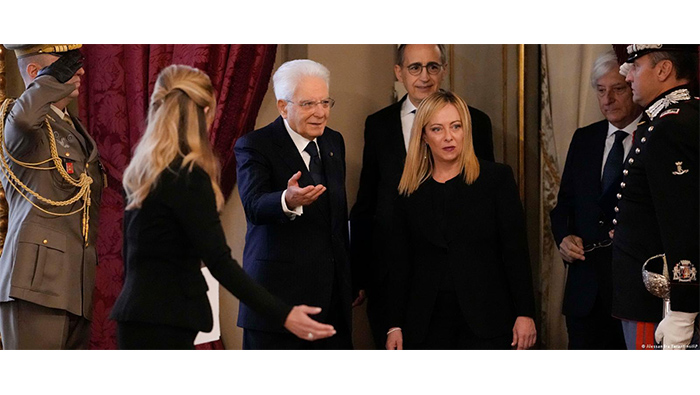 "Giorgia Meloni has accepted the mandate and has presented her list of ministers," Ugo Zampetti, a presidential official, told reporters after Meloni met the president at the Quirinale palace.

The  formal swearing in of the new government occurred on Saturday morning, after which it will face confidence votes in both houses of the parliament scheduled next week.

Meloni announces new cabinet
The new Italian prime minister named Giancarlo Giorgetti of the League party as her economy minister and Antonio Tajani from Forza Italia as the foreign minister.

Among other top cabinet posts, Matteo Piantedosi, a civil servant with no party affiliation was named interior minister and Guido Crosetto, co-founder of Brothers of Italy, was named defense minister.

In all, nine ministries were handed out to Brothers of Italy politicians and five each to the League and Forza Italia, with technocrats given a further five cabinet posts.

Meloni told reporters a little after her meeting with the president earlier Friday that her coalition partners had indicated to Mattarella that she deserved the mandate to govern.

The new government now faces a long list of challenges, including soaring energy prices, a war in Ukraine, and a renewed economic slowdown.

Even though partners Berlusconi and Salvini have talked about their fondness for Russian leader Vladimir Putin but distanced themselves from his invasion, Meloni has been firm about her support for Ukraine, which is in line with the rest of the European Union and the United States.

She has, however, called for a naval blockade to prevent migrant boats from leaving North African shores and is likely to clash with European powers over the topic of migration.

Meloni is the leader of far-right Brothers of Italy party, whose agenda is rooted in Euroskepticism and anti-mass migration policies.

She has sought to downplay her party's post-fascist roots, saying her party is similar to the Conservative Party in the UK or to the Republican Party in the United States.

Brothers of Italy party, or Fratelli d'Italia in Italian, does not support LGBTQ rights.

Meloni led the centre-right coalition that claimed victory with 44% of the vote in last month's general elections after Mario Draghi's government collapsed in July.