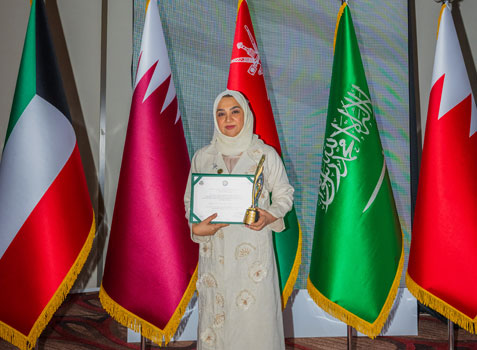 Member of the State Council and founder and chairperson of Dar Al Atta’a Association, Maryam bint Issa Al Zadjali, has been honoured with the Leading Figure in Social Work 2022 Award by the ministerial committees in Riyadh, Kingdom of Saudi Arabia.

The award is in recognition for her charity and voluntary work in the Sultanate of Oman, through the annual contributions to Dar Al Atta’a Association towards society and thousands of families and individuals and by leading effective voluntary campaigns in order to mitigate the burden of many families facing social, financial and educational challenges.

Since the establishment of Dar Al Atta’a Association 20 years ago until today Maryam Al Zadjali has been a provider of good deeds and support to the needy families through the association, which is her ‘Home’, and represents a milestone in sustainable, organised and systematic voluntary work in the field of donation and contributions based on modern scientific and administrative foundations and principles that accept the causes to support through social studies.

She has managed to identify difficult cases under harsh conditions to relieve their distress and to provide assistance that keeps pace with the needs of society.

There are statistics on some civil society association operating in charity field, in general, and in voluntary work in particular, which shed light on their contributions recognised by all official entities and society for their sincere efforts and humanitarian support aimed to mitigate the burden of a big sector of society which require support. Dar Al Atta’a is one of these association known for its charity work and has spent over OMR3 million in this field in 2021 targeting the less fortunate of society including OMR1.305 million through Fak Kurbah Initiative, OMR110,000 through the less fortunate family programme, OMR449,000 through the “Maskani Mamni Programme”, OMR159,000 for Students Welfare Programme OMR351,000 for Family Care Programme, OMR 158,000 for disaster relief and campaigns programme, OMR172,000 for Islamic Values Programe OMR48,387 for Together We Build Oman team and OMR273,787 for Ishraqa Team expenses.

Founded in 2002 and officially declared in 2006, Dar Al Atta’a is witnessing continued development year after year, thanks to the determination and sound management led by Maryam Al Zadjali, who works round the clock for the advancement and development of Dar Al Atta’a and for making the association the best not just in the Sultanate of Oman or the region but at the world level.

Maryam Al Zadjali is working for the welfare and happiness of all needy families and individuals within her vision “ better life to the needy people” and through her values and principles for serving society and individuals and on the Islamic values and teachings and inspired by the saying “Hadith” of the Prophet (PBUH) which goes “Be merciful to those on the earth and the One in the Heaven will be merciful to you”. Dar Al Atta’a, being a charity association, deals with the needy families and individuals in full transparency and is committed to partnership with all related parties when it comes to charity work.

Dar Al Atta’a also works on integration and equality in its work as to help the largest possible number of needy families and individuals within its available capabilities. Dar Al Atta’a also focuses on dissemination of the culture of giving to ensure sustainability of charity work. Within the “ Maskani Mamni” housing programme, which seeks to provide housing for needy families, the association is working on building the largest residential complex under the name Hayy Al Atta (Al-Ata District) for families affected by the unusual weather condition “Cyclone Shaheen”. The houses will be built in accordance with modern international standards, with basic facilities, in addition to other sustainable programmes to change the lives of families.

Giving is not restricted to the local community, but Dar Al Atta’a, under the management of Maryam Al Zadjali, has showcased the humanitarian side of the Sultanate by extending a helping hand, assistance and support to the needy families and individuals in the Arab and Muslim countries in cooperation with the Oman Charitable Organisation (OCO).

The development of Dar Al Atta’a is a source of pride to each and every one, thanks to the endeavours and determination of Maryam Al Zadjali in the field of voluntary works and to her unambiguous method related to this humanitarian side, which stresses continued giving, which makes the honour she received as a deserved award for her relentless efforts.

Maryam Al Zadjali has worked on implementing a transparent and reliable management process and the association has been awarded two ISO certificates in management and environment. Maryam Al Zadjali has set the first guidelines manual, which is considered the leading manual in charity work in the Sultanate and to cope with the latest technological developments, she initiated the first charity application in the Sultanate of Oman.

We wish success to the efforts undertaken of Maryam Al Zadjali and for going forward with the charity work, which she sees as a highly humanitarian value and as her noble mission and message in life. Our wishes of success also go to Dar Al Atta’a for opening wider horizons of giving for the needy families.