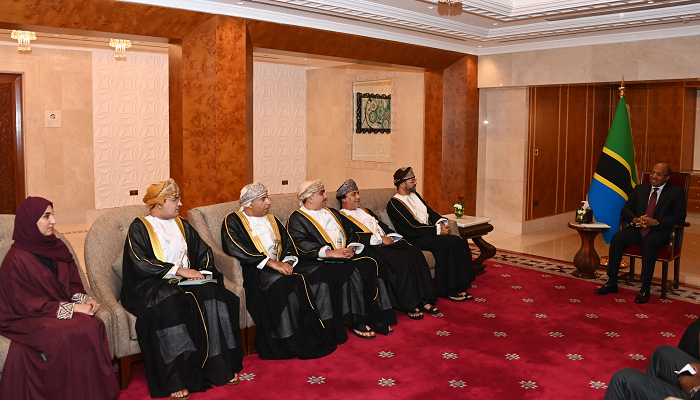 Muscat: Dr Hussein Ali Mwinyi, President of Zanzibar, received at his residence at the Al Bustan Palace Sayyid Badr bin Hamad bin Hamoud Al Busaidi, Foreign Minister, within the framework of his two-day official visit to the Sultanate of Oman.

Foreign Ministry said in a statement: During the meeting, the historical bilateral relations linking the two friendly countries were discussed, stressing the mutual interest in enhancing and developing them in various fields, especially in the economic, commercial, investment and cultural fields for the common benefits. A number of regional and international issues of common interest were also addressed.

The meeting was attended by Mohammed bin Nasser Al-Wahaibi, Undersecretary of the Foreign Ministry for Administrative and Financial Affairs; Saud bin Hilal Al-Shaidani, Oman's Ambassador to the United Republic of Tanzania; Khalid bin Hashel Al-Maslihi, Head of the Department of the Foreign Minister's Office, and Saeed bin Salem Al-Sinawi, Consul General of the Sultanate of Oman in Zanziba, the delegation accompanying the guest president and His Excellency Abdullah Abbas Kilima, Ambassador of the United Republic of Tanzania to the Sultanate of Oman, and a number of officials from both sides were also present.

President of Zanzibar arrived this evening in the Sultanate and HH Sayyid Asa'ad bin Tarik Al Said, Deputy Prime Minister for International Relations and Cooperation Affairs, Personal Representative of His Majesty the Sultan welcomed at Muscat International Airport for the guest and his accompanying delegation.