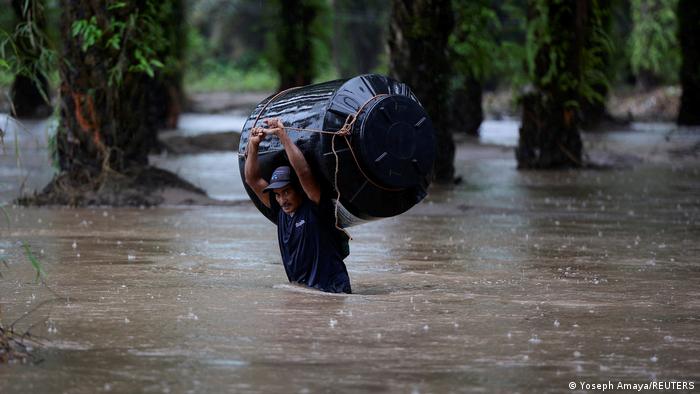 At least 25 people died due to Tropical Storm Julia, which battered parts of Central America and southern Mexico, officials said.

The weakening former hurricane deluged Guatemala and El Salvador on Monday with torrential rains after it reemerged in the Pacific.

Nicaragua was also devastated on its path.

What did authorities say?

The soldiers died when a wall collapsed in a house where they had sought refuge in the town of Comasagua. Security forces had been conducting anti-gang raids there.

Authorities in El Salvador also said that more than 1,000 people were evacuated.

Honduran officials reported five casualties, including a four-year-old boy and a 22-year-old woman swept away by currents. Authorities there also stated that 9,200 individuals took refuge in shelters.

In Panama, two deaths were reported by emergency services, and around 300 evacuations.

In Guatemala, eight people were killed.

A million people in Nicaragua were left without electricity as a result of storm Julia, and more than 13,000 households were forced to evacuate due to flooding and severe rain.


On Sunday, Julia made landfall on the Caribbean coast of Nicaragua before moving into the Pacific.

According to the US National Hurricane Center, by Monday afternoon Julia weakened and what was remained of the storm was travelling northwest at 15 mph (24 kph) across Guatemala, near the border with Mexico.

The center warned that the El Salvador and Guatemala's coastlines could see life-threatening surf and rip conditions.