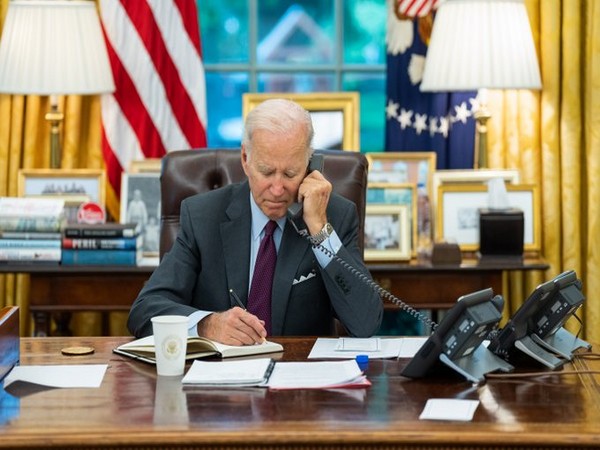 Biden's assurance comes as the United States has committed more than USD 15 billion in security assistance to Ukraine since January 2021, according to the US Defence department. Biden last week announced plans to provide an additional USD 625 million in military aid to Ukraine, which included High Mobility Artillery Rocket Systems, or HIMARS, artillery systems ammunition, and armoured vehicles.

"President Joseph R. Biden, Jr., spoke today with President Volodymyr Zelenskyy of Ukraine. He expressed his condemnation of Russia's missile strikes across Ukraine, including in Kyiv, and conveyed his condolences to the loved ones of those killed and injured in these senseless attacks," the White House said in a press readout.

"President Biden pledged to continue providing Ukraine with the support needed to defend itself, including advanced air defence systems," the statement added.

During the phone conversation, the US President underscored his "ongoing engagement with allies and partners to continue imposing costs on Russia, holding Russia accountable for its war crimes and atrocities, and providing Ukraine with security, economic, and humanitarian assistance."

On Monday, Russia conducted that large-scale strikes on the Ukrainian capital Kyiv and other locations on Monday, which drew condemnation from several countries. In a statement earlier, Biden said the recent wave of Russian strikes "once again demonstrates the utter brutality of Putin's illegal war on the Ukrainian people."

Earlier, UN spokesperson said UN chief Antonio Guterres expressed deep shock.
The strikes which have reportedly caused widespread damage to civilian areas and led to dozens of deaths and injuries, showed that "as always", civilians were paying the highest price for Russia's invasion of February 24.

This phone call between Zelenskyy and Biden came after US State Secretary Antony Blinken spoke with Ukrainian Foreign Minister Dmytro Kuleba about the Kremlin's strikes against Ukraine, including "waves of missiles that hit the streets of several Ukrainian cities during rush hour."

"The Secretary commended Ukraine for not allowing President Putin to break Ukraine's spirit and reaffirmed the US resolve to support Ukraine," State Department Spokesperson Ned Price said in a statement.

Blinken noted that the United States will continue to provide vital economic, humanitarian, and security assistance so Ukraine can defend itself and take care of its people.