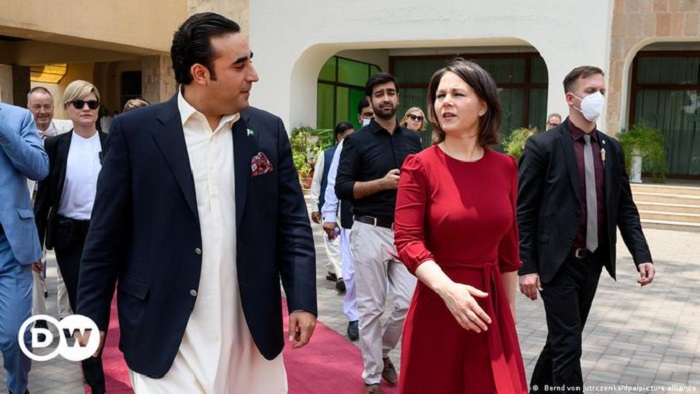 Pakistan has witnessed catastrophic flooding over the past few weeks that have affected more than 33 million people — some 15% of the nation's population — and submerged a third of the country.

The natural disaster has killed over 1,500 people and caused damage worth billions of dollars, compounding the woes of an economy already beset by a raft of problems, ranging from a heavy debt burden and ballooning current account deficit to a tumbling currency and skyrocketing inflation, particularly food prices.

Eight million people still remain displaced, and the World Bank said that the loss of jobs, livestock, harvests and houses as well as the spread of disease, among other problems, threaten to throw millions of people into poverty.

Scientists have said the recent devastating flooding in Pakistan was made worse by climate change caused by greenhouse-gas emissions, which is leading to some kinds of extreme weather becoming more frequent and intense.

On Friday, Bhutto Zardari met with his German counterpart Annalena Baerbock. In a joint press conference after the meeting, he described the floods in his country as a crisis of "biblical proportions." The German foreign minister told him that Pakistan can count on German solidarity, offering financial support worth €60 million ($58.4 million).

"I'm grateful to Foreign Minister Baerbock for her hospitality," Bhutto Zardari told DW's Richard Walker. "Going forward, we want to work with our partners, including our friends in Germany, on figuring out ways to finance the reconstruction and rehabilitation as a result of the devastation caused by the floods," he added.

Some Pakistani government officials, however, have slammed the international response to the climate catastrophe in Pakistan as "inadequate."

But Western countries are currently busy dealing with rising tensions with Russia, which invaded Ukraine in February.

As a result of the war in Ukraine, European countries are facing an energy crisis and record inflation. The German government recently announced that it wanted to spend €200 billion on trying to keep energy prices low in the country.

Bhutto Zardari, however, pointed out that helping Pakistan deal with the climate crisis is not a "charity" from Western nations.

"It's a question of justice that a country that produces 0.8% of the global carbon footprint is the eighth most climate stressed country on the planet. Some 33 million people are paying with their lives and their livelihoods for the industrialization of richer countries," he said, underlining that "this is a global problem demanding global actions."

"We hope that it also has global solutions despite the incredible difficulties that everybody is facing at this time," the minister added.