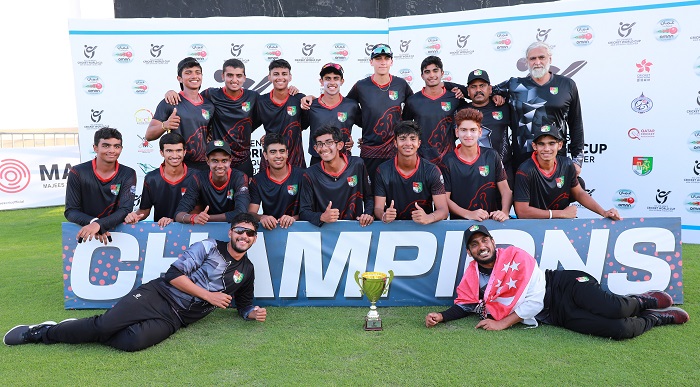 Hosts Oman defeated Bahrain by 187 runs to finish third in the other match of the day at the OCA 2 ground.

Both the finalists, Singapore and Hong Kong, had already secured a berth in the 2023 ICC U19 CWC Division – 1 Asia Qualifier on Thursday.

An unbeaten Singapore stamped their authority in the tournament with five victories on the trot and yet another all-round team efforts in the final at the OCA 1 ground.

Chasing 202 to win, Singapore struggled early on as they lost the opening pair for just seven runs in the third over. A lot rested upon the shoulders of Sidhant Srikanth and Vihan Maheswari and the duo counter-attacked.

Srikanth, who had hit the only century (122 vs Qatar in group stage) of the tournament ahead of the final, was dismissed in the 12th over by Ahan Trivedi to apply brakes on the run-chase.

Aaryan Modi joined Vihaan and took the attack to the rival camp with a range of strokes around the park. Both dominated the Hong Kong bowlers for the next 18 overs with Vihaan showcasing his strokepaly with some lusty hits as he reached his century with two successive fours and a six. His 100 came off 90 balls and was studded with eight boundaries and three maximums.

However, Vihaan returned to the pavilion in the same over he reached his landmark. Aryan Chandiramani broke the partnership in the 31st over with Singapore on course of a well-deserve win, requiring just 21 off 19 overs.

Modi went on to reach his personal milestone with a half-century in the 35th over. He along with his skipper, Jeevan Santhanam, led the team to victory in 37.2 overs with the captain reaching the victory with a six.

Man of the tournament and Singapore skipper Jeevan Santhanam said: “For me and my team, the tournament was fantastic. We got to know our strengths and weaknesses and really enjoyed the atmosphere while playing here.

“In Division -1, we hope to see a similar level of our competitiveness if not even more. If all goes well, we will reach the World Cup.”

Man of the match Vihaan Maheshwari said: “When I came in to bat, the team was struggling with two early wickets and didn’t have too many runs on the board. It was important to build a partnership and I and Sid [Sidhant Srikanth] did manage but unfortunately, he got out. After that it was important not to lose focus in these hot conditions. But Modi [Aaryan] and I came up with a very good stand as we started with singles and doubles. Once those came easily we accelerated and the momentum shifted into our hands and we took it.”

Singapore’s Sidhant Srikanth emerged as the tournament’s highest run-getter with 261 runs while Santhanam was the highest wicket-taker with 15 wickets.


At the OCA 2 ground, hosts Oman signed off the tournament with an emphatic 187-run win against Bahrain to finish third in the eight-nation Qualifier.

Disappointed on missing the berth for Division -1 Asia Qualifier after their defeat to Hong Kong on Thursday, Oman boys bounced back to register a consolation win for the third-place playoff.

A stellar 145-run fifth wicket partnership between in-form Aryan Bisht and Siddh Mehta guided Oman to a strong total of 258/4 in the stipulated 50 overs.

Bisht hammered his second half-century of the tournament with an unbeaten 78 off 82 while Mehta scored run-a-ball 64 that included seven boundaries.The partnership came in 22.5 overs and consolidated the strong start by the opening batting pair.

Aditya Gurumukhi and skipper Arjun Dhiman took the score to the century-mark but Bahrain claimed another two wickets in quick succession with Oman 113/4.

It was then a Bisht-Mehta show after the exit of skipper Dhiman, who became the second victim of Nadith Tennakoon, off the first ball of 28th over.

Bisht and Mehta ensured Oman ended with their highest score in the tournament, surpassing the 255 the hosts had made in the opening group stage against Bhutan.

The total was a challenging task for Bahrain, and the dismissal of three batters in just two overs took the match away from them.

Mohammed Arafat’s pace troubled the Bahraini batters and his double-strike in a space of two balls in the second over did the damage.

Skipper Aryan Ashwin and Muhamad Adil Khan tried to rebuild their innings with a 40-run stand but Ashwin suffered injury on his chin in the tenth over off Arafat’s bouncer.

Forced to retire hurt for 26 off 34, Ashwin’s departure was soon followed by Khan for 13. The middle and lower order then caved in as they were bowled out for 71 in 19.5 overs.

Siddh Mehta, who was adjudged the man of the match, and Aryan Bisht, after their heroics, with the bat also picked wickets with Mehta’s off-spin getting him two wickets for just eight runs. Bisht had figures of 1/7 while Mohammed Arafat was the best of the lot with 3/16. Chaitra Thanki and Dhiman were also among the wickets.