Muscat: Foreign tourists never stop coming to Oman to get a chance to see the world’s second largest chandelier at the Sultan Qaboos Grand Mosque in Ghubrah. The mosque also boasts the second biggest carpet in the world ever woven for any other institution, private or public.

“Many of the visitors to the Grand Mosque are elated on the first view of the beauty and magnificence of the chandelier and the carpet,” Hafidh Al-Rawahy, Volunteer at the Islamic Information Centre in the Sultan Qaboos Grand Mosque, told Times of Oman.

The government of Oman commissioned Swarovski, a famous Austrian-based crystal glass manufacturers, to design the chandelier. It is hanging from the enormous dome of the mosque above the magnificent prayer hall. The chandelier is eight meters in diameter and 14 meters high, weighing about eight tonnes.

It has one thousands halogen lamps surrounded by 600,000 pieces of crystal glasses, supported by an array of magnificent gold plated structures. At the time it was installed, just a few months before the Grand Mosque was opened in May 2001, the grandiose chandelier was the biggest in the world. The giant chandelier lights up the glorious carpet.

It was intricately weaved by the best carpet makers in the world, the Iran Carpet Company (ICC) based in Tehran.  It has an area of 4,263 square meters, weighs a massive 21 tonnes and took 27 months to make. It has thousands of beautiful patterns of intricate Islamic designs beautifully woven together in great harmony. 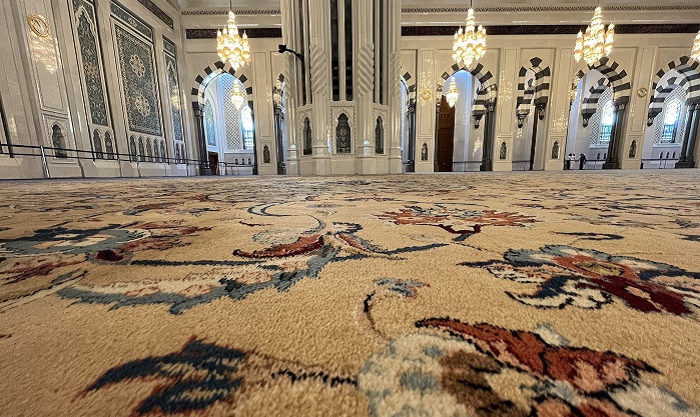 “The carpet is a world class work of art. It is a feast for the eyes of any visitor who comes to see it. This is the third time I come to Oman in the last eight year and I always insist of visiting the Grand Mosque to see it and the magnificent chandelier that hangs over it,” Tony Newton, a British tourist, told Times of Oman.

The official statistics show that over 70,000 tourists visit the Grand Mosque in a year, mostly from European countries, Japan and China. The roof of the Grand Mosque is square shaped surrounded by the central dome with a total height of 50 meters. It has five minarets that define the five pillars of Islam. The main minaret is 92 meters tall while the rest are 45 meters high.

Its interior can hold up to 6,500 worshippers while the exterior, surrounded by beautiful gardens, can accommodate around 10,000 people. It also has a separate hall for women that can hold about 4,000 worshippers.