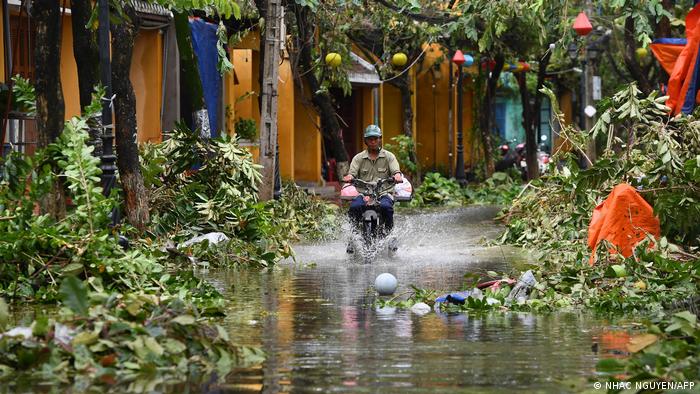 Tropical storm Noru reached the Vietnamese coast on Wednesday, still packing winds of up to 117 kilometers (72 miles) per hour despite being downgraded from typhoon status by weather authorities in the country. The storm tore off the roofs of several homes and caused power outages in parts of central Vietnam.

The resort city of Da Nang in Quang Nam province, also the home of the historic city of Hoi An, was in the center of the powerful storm's path.

Thousands in shelters while airports and highways closed


More than 300,000 people had taken refuge in shelters overnight anticipating landfall. People were told to stay off the streets of Da Nang late on Tuesday.

State media said that the Defense Ministry had mobilized around 40,000 soldiers and 200,000 militia members to use armored vehicles and boats to assist with rescue and relief operations if necessary.

People living in less robust houses, in particular, have sought out shelter. According to the AFP news agency, roughly 300 houses in the coastal region of Quang Tri had their roofs blown off late on Tuesday as the storm approached and winds started picking up speed.

Several airports in Vietnam have been shut. Schools and offices across several provinces were closed. The central section of the coastal highway linking Hanoi in the north with Ho Chi Minh City in the South — with Da Nang roughly the mid-point on this journey — was closed.

In the tourist city of Hoi An, the Hoai River was close to bursting its banks, while the ground was littered with metal roof sheeting and fallen trees which had damaged cars and blocked roads.

"The typhoon was terrible last night. I could not sleep as the wind was so strong and loud," resident Nguyen Thi Hien told AFP.

Major damage, 6 dead in the Philippines


Still a super typhoon on arrival, Noru hit the Philippines' Luzon island on Sunday and Monday, toppling trees, knocking out power and flooding some low-lying communities.

Five rescuers sent to help flooded residents were killed in the storm, while another man died in a landslide. Officials in the Philippines also reported considerable damage to crops.