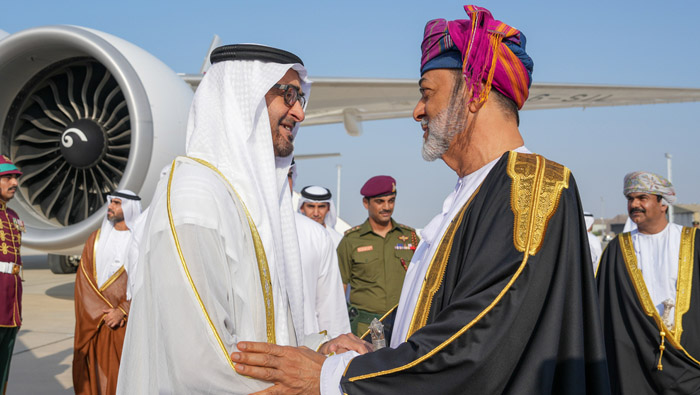 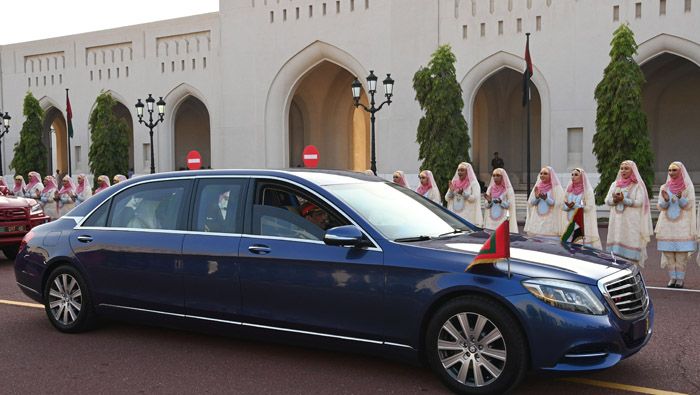 When the jet touched ground at the Royal Airport, His Majesty the Sultan met the guest at the foot of the ramp, welcoming him and wishing him and his official delegation a pleasant stay in Oman. 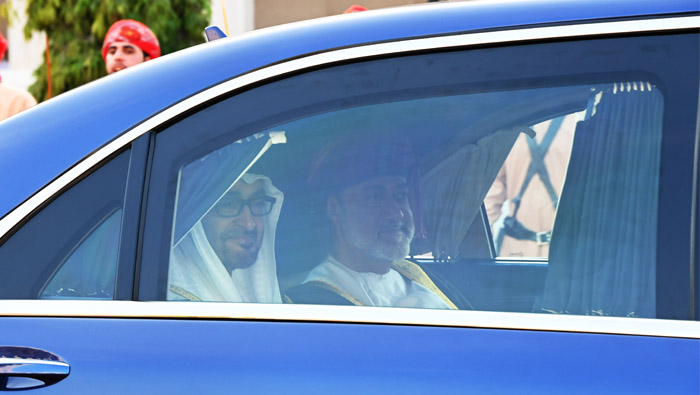 When the guest’s jet entered the Omani airspace, it was escorted by a squadron of military aircrafts till its arrival at the Royal Airport. 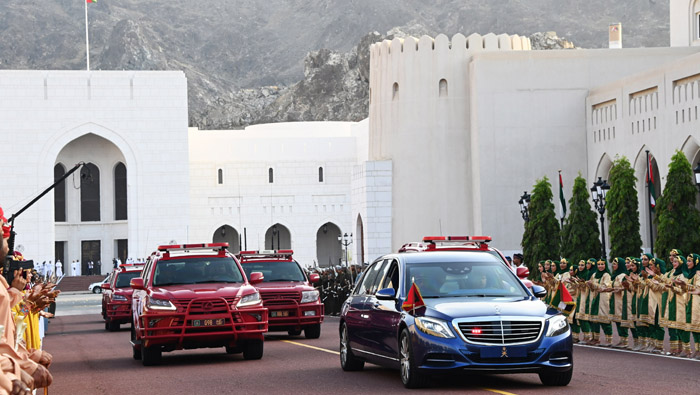 
Then, His Majesty the Sultan and Sheikh Mohammed bin Zayed headed to the hall, flanked by two rows of the Royal Guard of Oman (RGO).


After a short break, the motorcade of the two leaders left the Royal Airport, heading to Al Alam Palace for the official and popular reception.


As the motorcade passed Muscat Gate, a group of Royal Camel Corps lined both sides of the road, welcoming the guest. Then, a cavalcade from the Royal Cavalry and the RGO Cavalry escorted the motorcade till the National Museum’s building, to the accompaniment of a mounted military music band.


Upon the arrival of the official motorcade at the yard leading to Al Alam Palace, a popular reception was held, with the participation of more than 600 male and female citizens. A cluster of folklore bands lined the passage, chanting lyrics in a manifestation of warm welcome to the guest.


When the official motorcade arrived at the internal courtyard of Al Alam Palace, a welcoming tune was played by the RGO band, in an atmosphere of fanfare and ambiance.


After that, His Majesty the Sultan accompanied Sheikh Mohammed to the Dais of Honour where the National Anthem of the United Arab Emirates was played while the artillery fired a twenty-one gun salute for the guest.


After that, His Majesty the Sultan and the guest proceeded to the hall where they took Arabian coffee.

ONA added: “During the session, the well-established historical relations between the two countries and ways of enhancing and developing them in all fields to serve the interests of the people and achieve their common aspirations were reviewed.”

In addition to exchanging views on the latest developments in the region, regional and international developments, and matters of mutual interest.

“His Majesty the Sultan/ His Highness bestows the highest Omani decoration, 'The Order of Al Said', in appreciation of his brother, the President of the United Arab Emirates, in appreciation of the strong brotherly ties that unite the two brotherly countries and peoples,” Oman News Agency (ONA) reported.