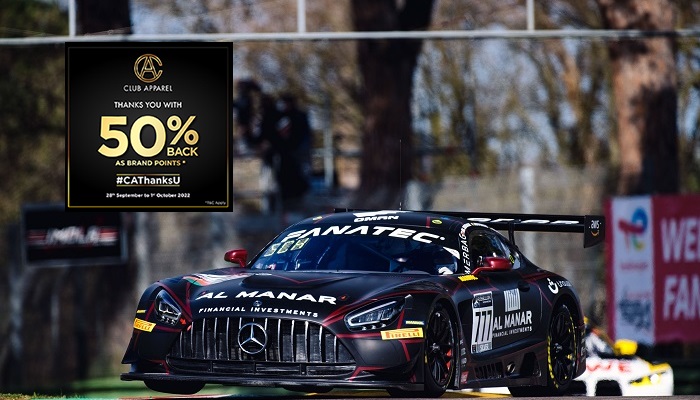 BARCELONA: Oman’s Al-Faisal Al-Zubair, German team-mate Fabian Schiller and Zimbabwe’s Axcil Jeffries round off their maiden season in the 2022 Fanatec GT World Challenge Europe Powered by AWS – Endurance Cup at the final round in Barcelona this weekend.

The Al-Manar Racing by HRT Mercedes-AMG GT3 crew have adapted well to the new racing discipline and currently hold fourth position in the Drivers’ Championship standings, the highlight of the season thus far being their memorable Silver Cup victory at the Paul Ricard circuit in France back in early June.

The early leaders in the championship will be looking for a strong performance at the 4.7km Catalunyan circuit to round off a season that has seen Benjamin Goethe, Thomas Neubauer and Jean-Baptiste Simmenauer top the standings and win the title in their Team WRT Audi R8.

The Al-Manar Racing trio could still overhaul the Attempto Racing Audi R8 crew of Nicolas Schöll, Alex Aka and Marius Zug and claim the runner-up spot in the rankings. Al-Zubair said: “This is the last race of the season and I am looking forward it. It is

Barcelona and this is a track that I really enjoy as well. It’s crazy to think how fast the season has gone and that we are already here after five rounds. It will be difficult, like all the other rounds of the GT World Challenge. But, nonetheless, we have proved that, not only the car, but the team have been quick this year and we can probably get a good result to round off the year. Hopefully, the balance of performance is on our side. Let’s hope we can end the season on a strong note.”

Forty-nine cars line-up at the start of the weekend’s action, which gets underway for the 18 Silver Cup runners with free practice from 09.00hrs to 10.30hrs on Saturday (October 1) morning. This precedes pre-qualifying on the circuit from 13.40hrs.

The two-hour qualifying sessions fire into life at 09.00hrs on Sunday and the three-hour racing finale to the season gets the green light for a rolling start at 15.00hrs.