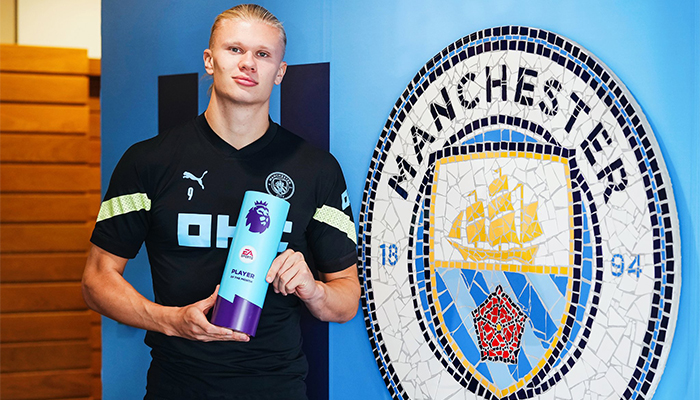 The summer signing scored against West Ham United, Newcastle United, Crystal Palace and Nottingham Forest, and got an assist in his other appearance, against AFC Bournemouth.

His nine goals in his first five matches were the most in the competition's history, breaking the record of eight previously held by Mick Quinn and Sergio Aguero.

The 22-year-old also become only the sixth player to score hat-tricks in successive Premier League appearances, doing so against Palace and Forest to be the first to achieve the feat since Harry Kane in 2017.
Haaland is the first player to win the award in his first month in the competition since Bruno Fernandes did so for Manchester United in February 2020.

"I am delighted to win this award for the first time - it was an incredible start of the season for the team and I am grateful to everyone who voted. We all wanted to hit the ground running this season, so winning four games out of five was a great start for us in what is the most challenging competition in the world. I am happy to have played my part by scoring goals," Haaland said in an official statement released by Manchester City FC.

"What's important is the result and to help the team. Hopefully, I can continue to support the team, make our fans happy with our performances and carry on our strong start to the season," he added.