Ferrari Purosangue: Unlike Any Other 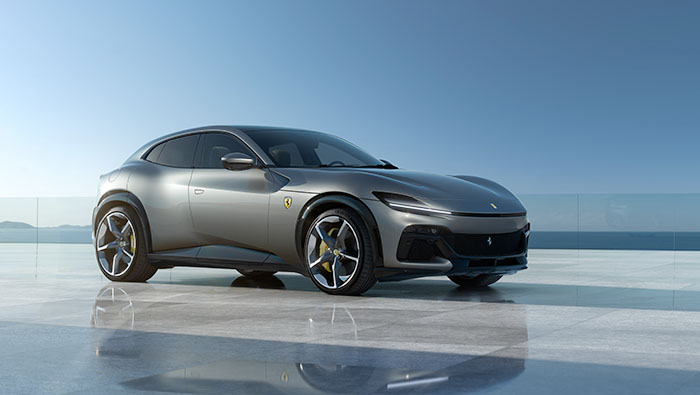 Lajatico: After years of anticipation by the international automotive fraternity, Ferrari unveiled the Purosangue, the first ever four-door, four-seater car in the Prancing Horse’s 75-year history, in the magnificently atmospheric surroundings of the Teatro del Silenzio in Lajatico (Pisa).

Since the marque’s earliest years, 2+2 cars (i.e. with two front and two smaller back seats) have played a significant role in its strategy. Many Ferraris have made combining benchmark performance with first class comfort one of the pillars of their success. Now, in the culmination of 75 years of leading-edge research, Ferrari has created a car that is unique on the world stage: not only do performance, driving pleasure and comfort coexist in perfect harmony, but it is also a peerless encapsulation of the Prancing Horse’s iconic DNA. Which is the reason why the name Purosangue, Italian for ‘thoroughbred’, was chosen.

To enable the company to achieve the ambitious goals set for this project and create a car worthy of a place in its range, a completely different layout and innovative proportions compared to modern GT archetypes (so-called crossovers and SUVs) were adopted. The average modern GT’s engine is mounted forwards in the car, almost straddling the front axle with the gearbox coupled directly to it: this results in less than optimal weight distribution that delivers driving dynamics and driving pleasure well short of the standards of excellence to which Prancing Horse clients and enthusiasts have become accustomed.

The Purosangue, on the other hand, has a mid-front-mounted engine with the gearbox at the rear to create a sporty transaxle layout. The Power Transfer Unit (PTU) is coupled in front of the engine to provide a unique 4x4 transmission. This delivers exactly the 49:51% weight distribution that Maranello’s engineers deem optimal for a mid-front-engined sports car.

The Purosangue stands head and shoulders above the rest of the market thanks to its performance and comfort. It is the only car with these proportions to sport a mid-front-mounted, naturally-aspirated V12: Maranello’s most iconic engine debuts in this brand new configuration to ensure the car unleashes more power than any other in the segment (725 cv) whilst guaranteeing the most enthralling Ferrari engine soundtrack. Furthermore, it can deliver 80% torque even at low revs for unique driving pleasure at all times.

The Purosangue’s aero development focused on making the bodywork, underbody and rear diffuser as efficient as possible. New solutions include synergy between the front bumper and wheelarch trim which generates an air curtain that aerodynamically seals the front wheels, preventing turbulent transverse air flows being generated.

Ferrari has also given the Purosangue the very latest iterations of the vehicle dynamic control systems introduced on its most powerful and exclusive sports cars, including independent four-wheel steering and ABS ‘evo’ with the 6-way Chassis Dynamic Sensor (6w-CDS). Making its world debut is the F.A.S.T. (Ferrari Active Suspension Technology) system. This very effectively controls body roll in corners as well as the tyre contact patch over high-frequency bumps to deliver the same performance and handling response as in one of the marque’s sports cars.

The all-new chassis has a carbon-fibre roof as standard to keep weight down and lower the centre of gravity. Redesigning the bodyshell from scratch also meant the designers could incorporate rear-hinged back doors (welcome doors) to make ingress and egress easier while keeping the car as compact as possible. The cabin has four generous heated electric seats that will comfortably accommodate four adults. The boot is the largest ever seen on a Ferrari and the rear seats fold to increase the luggage space. Naturally enough, the Purosangue has a more commanding driving position than other Ferraris, but the configuration is the same as on every other Ferrari. As a result, the driving position is still intimate and close to the floor to provide greater connection to the car’s dynamic capabilities.

The Purosangue offers class-leading performance figures (from 0 to 100 km/h in 3.3 s and from 0 to 200 in 10.6 s); the driving position and the heady, naturally-aspirated V12 soundtrack deliver an entirely new yet also entirely Ferrari driving experience. The fact that a vast array of comfort-focused content is provided as standard, such as the Burmester© audio system, and that the many optional extras including the brand-new Alcantara® upholstery, derived from certified recycled polyester, make the PUROSANGUE the most complete four-door, four-seater in the segment.


The Purosangue’s engine (code-named F140IA) maintains the architecture that made the Prancing Horse’s most recent 12-cylinders so successful i.e. a 65° angle between its cylinder banks, a 6.5-litre capacity, dry sump and high-pressure direct injection. It was designed, however, to produce the highest amount of torque at low revs possible without losing the feeling of linear, never-ending power typical of Ferrari’s naturally-aspirated V12s. 80% of the maximum torque is on tap at just 2100 rpm and it peaks at 716 Nm at 6250 rpm. Maximum power of 725 cv is reached at 7750 rpm and throttle response is characteristic of a real sports car.


The Purosangue’s chassis is completely new and was designed from scratch with the aim of producing a structure of uncompromising rigidity. The lower chassis structure is made entirely from high-strength aluminium alloy and draws on Ferrari’s enormous experience in the optimal use of these light alloys. Together with the structural elements of the upper body, it makes up a spaceframe chassis comprised of closed-section extrusions connected by castings into which load-bearing aluminium sheet metal elements are integrated.


Development of the Purosangue’s dynamic performance focused on creating a car that was completely unprecedented on the world stage: a model offering usability and comfort standards that would position it at the very top of the market as well as delivering signature Ferrari vehicle dynamics and performance on a par with the rest of the range.


The very different volumes and constraints of the truly unique Purosangue posed a completely new challenge for Ferrari’s aerodynamic department, so a radical rethink of both methods and solutions was demanded. The extremely ambitious drag reduction target, the specific usability and accessibility demands of this particular model, and the need to cool the imposing V12 and ancillaries demanded hundreds of hours in the wind tunnel and thousands of CFD (Computational Fluid Dynamics) simulations. The kind of development work dedicated to the fastest and most powerful sports cars in the range, in fact.


The Purosangue’s cabin demanded absolutely meticulous design of both the space and furnishings as well as careful selection of the materials used to offer unprecedented occupant space and comfort for a Ferrari four-seater. The cabin looks and feels like an extremely elegant, sporty lounge. When the doors are opened, a surprisingly generous amount of space is revealed. Equally surprising is the sophisticated luxury of the interior which exudes a sense of both elegance and modernity.


The Purosangue’s bodywork has been deftly sculpted and chiselled to create its unique shape. The design features two separate and distinct levels: the lower more technical underbody and the gloriously sinuous, imposing upperbody. This division is underscored by the fact that the upper volume seems to float on the wheelarches.


The Purosangue has created a new market segment in which the Prancing Horse opens entirely unprecedented new frontiers. Thanks to its unique modern architecture, the Purosangue is a versatile car that melds unparalleled comfort with Ferrari’s signature performance and driving pleasure. Translating Prancing Horse DNA into a car that is not only innovative for Maranello, but the entire automotive world, was a huge but exhilarating challenge for the Ferrari Styling Centre headed by Flavio Manzoni.


The Purosangue offers a vast range of optional content and personalisation choices that will allow every owner to strike the perfect balance between comfort and performance. Aside from a huge array of exterior and interior colours, including some specific to the model, further innovative solutions have been introduced that are new to the Ferrari range or indeed the market as a whole.


Ferrari’s unparalleled quality standards and increasing focus on client service underpin the extended seven-year maintenance programme offered with the Purosangue. Available across the entire range, the latter covers all regular maintenance for the first seven years of the car’s life. This scheduled maintenance programme for Ferraris is an exclusive service that allows clients the certainty that their car is being kept at peak performance and safety over the years. This very special service is also available to owners of pre-owned Ferraris.