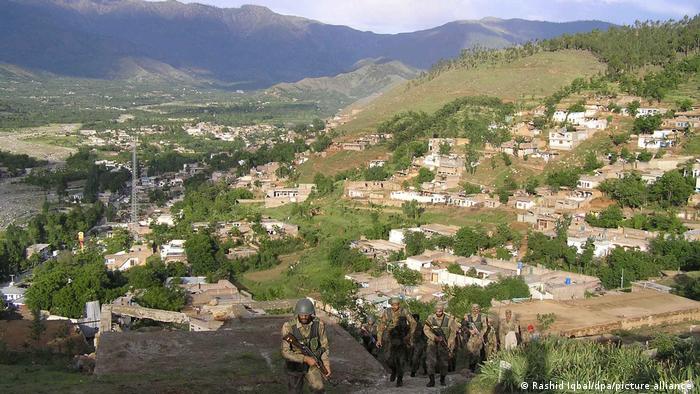 The Taliban claimed responsibility on Wednesday for a bomb attack that killed a local pro-government militia chief in the Swat region of Pakistan on Tuesday.

The Tehreek-e-Taliban (TTP) — the Pakistani Taliban group is not directly connected to its Afghan counterpart, but shares a similar ideology — claimed that Khan had been involved in killing their members.

"We killed the leader of the peace committee Idress Khan in the area of Brai Bandi in the district of Swat with a bomb," the TTP said in a statement. "Khan was involved in killing Taliban and torturing mujahedeen and their families in safe houses. The mujahedeen were pursuing him for almost 13 years."

Attacks on the rise again


The Swat valley, in the northwestern province of Khyber Pakhtunkhwa which borders Afghanistan, had been a stronghold for the TTP.

They were kicked out by a major military operation between 2007 and 2009.

Residents have complained recently that the militant group, which aims to set up an Islamist state in Pakistan, has returned to the area.

Tuesday's attack was reported by DPA as the first in the Swat valley since the Taliban shot Nobel laureate Malala Yousafzai in 2012.

Islamabad has also reported more attacks by the TTP since the Taliban took power in Afghanistan, especially along their largely porous shared border.

Reports of Taliban regrouping amid truce


Besides the attack in Swat, the TTP also claimed responsibility for a clash with Pakistani soldiers on Tuesday in the Kurram district on the Afghan border that left three soldiers dead.

Another attack that resulted in the kidnapping of at least seven people working for the Norwegian telecom giant Telenor in Swat on Tuesday also bore the hallmarks of a Taliban operation.

Recent weeks have seen mass demonstrations in the region against the central government's failure to act against the apparent regrouping of the militants.

The TTP agreed to an indefinite cease-fire with Islamabad in June as a step toward peace talks facilitated by their allies in Afghanistan. The series of attacks since then appear not to have broken the truce.

Some 80,000 people have been killed by the Pakistani Taliban over the years.