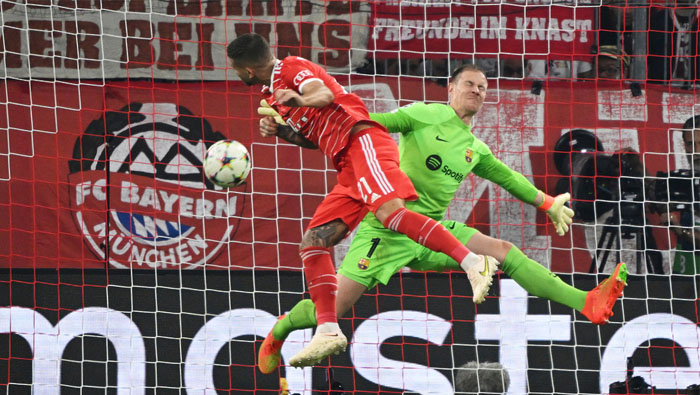 Munich: Bayern Munich extended their undefeated run in the Champions League group stage to 30 games by defeating Barcelona 2-0 at the Allianz Arena.

The two clubs are no strangers having faced one another in the group stage last season.

Tuesday's match followed a similar script, with the Germans coming out on top once again, thanks to goals from Lucas Hernandez and Leroy Sane.

Robert Lewandowski was playing against his former club for the first time since joining Barcelona in the summer.

Unfortunately for him and Barcelona, nerves got the better of him as he missed two big chances inside the opening 20 minutes, firing over from close range and then being denied by Manuel Neuer on the second, the Spanish MARCA newspaper reported.

Bayern finally responded through Noussai Mazraoui, who came on for the injured Benjamin Pavard, but his effort was easily stopped by Marc-Andre ter Stegen.

A last-ditch tackle by Mazraoui denied Lewandowski to close the half, with Barcelona heading into the break with 10 attempts on goal compared to Bayern's four.

The missed opportunities proved costly for the away side as Bayern broke the deadlock in the 50th minute.

Lucas Hernandez managed to escape the clutches of debutant Marcos Alonso and header home to the delight of the home fans, who erupted with joy.

Before Barcelona could find their bearings, they conceded a second four minutes later.

Sane slalomed through the Blaugrana defence after a brilliant ball from Jamal Musiala, and the former Manchester City man kept his footing before slotting home past Ter Stegen.

Pedri came close to getting Barcelona back in the match in the 63rd minute.

After collecting a return pass from Sergio Busquets, he lifted the ball over an onrushing Neuer only for it to come back off the post.

From there Bayern used all their experience to see out the rest of the game, with the result moving them atop the Group C standings, while Barcelona sit level with Inter, who defeated Viktoria Plzen earlier in the day, on three points.