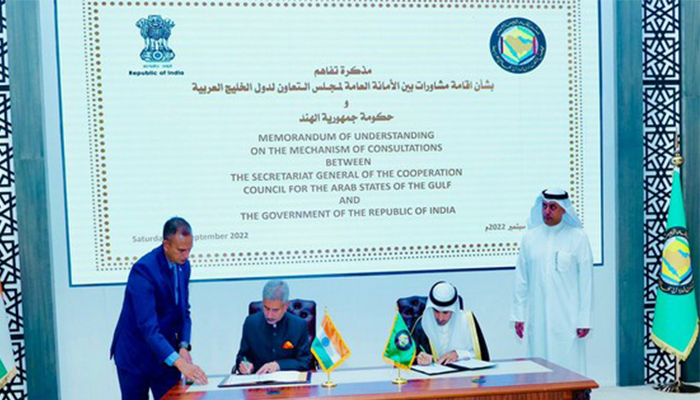 Riyadh : External Affairs Minister S Jaishankar on Saturday signed a Memorandum of understanding (MoU) with the Secretary-General of Gulf Cooperation Council (GCC) Nayef Falah Mubarak Al-Hajraf on the mechanism of consultations between India and the GCC.

The MoU was signed between the Secretariat General of the cooperation council for the Arab States of the Gulf and the Government of India. Besides, Jaishankar held a bilateral meeting with the Secretary-General and discussed the relevance of India-GCC cooperation in context with the current regional and global situation.

"Productive meeting with @GCC Secretary General Dr Nayef Falah Mubarak Al-Hajraf. Signed the MoU on mechanism of consultations between India and GCC. Exchanged views on the current regional and global situation and the relevance of India-GCC cooperation in that context," Jaishankar tweeted.

"Began my visit to Saudi Arabia with an interaction with our community. Appreciated the contribution of our Diaspora in facing national challenges. Spoke to them about our country's resilience, especially during time of the Covid & national transformation that is underway in India," Jaishankar tweeted.

Upon reaching Saudi Arabia, Jaishankar addressed the Indian diaspora in Riyadh. During his address, Jaishankar highlighted that India has made powerful efforts to actually grow its economy and move toward becoming a higher-income country.

He said that India thinks about the ways in which it can change its credit, banking, education and labor policy. "Many big reforms have taken place and we can see the result of that in two very interesting developments. In the year ending 31 March, 2021 we have posted the highest export that we have ever done. Our total exports were 670 billion USD. We had to trade in goods for 400 billion USD."

Jaishankar stressed that the idea of India as a trading power has become credible today.
He noted that despite the challenges posed by the Ukraine crisis, India is confident that it will be the fastest-growing major economy in the world this year with at least 7 per cent growth.

Noting the world is facing many fallouts of the Ukraine crisis such as rising oil prices, Jaishankar while addressing the Indian diaspora in Riyadh said, "We are very confident that India will be the fastest growing major economy in the world this year. We will get at least 7 per cent growth.