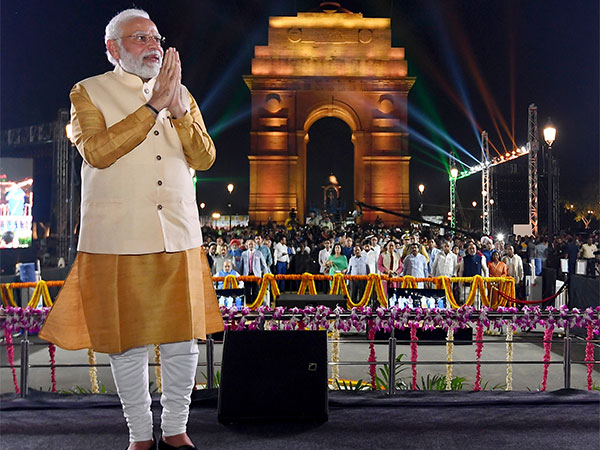 New Delhi: Prime Minister Narendra Modi on Thursday called upon the citizens to visit the revamped Kartavya Path at the India Gate in the national capital, stating that the "India of the future" can be seen in its development.

The Prime Minister also urged the people to capture pictures and selfies along with their families on Kartavya Path and share them on social media. Addressing the event on the occasion of the inauguration of the Kartavya Path, earlier known as Rajpath, PM Modi said, "I appeal to every citizen of the country, I invite all of you, come and see this newly constructed Kartavya Path. In its development, you will see the India of the future. The energy here will give you a new vision for our vast nation, a new belief."

"From tomorrow to the next three days. Three days here is the evening drone show based on the life of Netaji Subhas Bose. You come here, take pictures of yourself and your family, and take selfies. You must also upload them on social media with the #Kartavya Path," the Prime Minister added.

He expressed his belief that the inspiration of the Kartavya Path will create a flow of duty in the country.

"I know this entire area is the heartbeat of the people of Delhi, and a large number of people come with their families to spend time in the evening. The planning, designing and lighting of the Kartavya Path has also been done keeping this in mind. I believe that this inspiration of Kartavya Path will create a flow of duty in the country and this flow will take us to the fulfilment of the resolve of a new and developed India," PM Modi said.

As a part of the Central Vista redevelopment project, Prime Minister Narendra Modi inaugurated the 'Kartavya Path' at India Gate on Thursday.

He also witnessed an exhibition on revamped Central Vista Avenue.