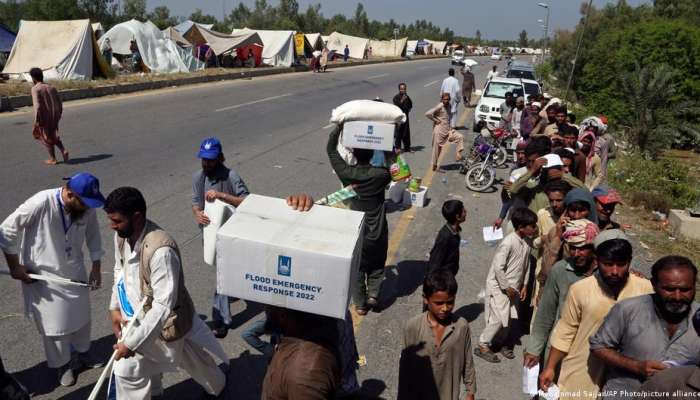 Karachi: Food prices in Pakistan are skyrocketing as a result of catastrophic floods that have killed thousands and devastated the country's agricultural sector.

The death toll from the floods, which began in mid-June, is over 1,000. In total, some 33 million people have been affected by the floods in the country of around 220 million.

The IMF has released $1.17 billion (€1.17 billion) out of a bailout fund that had been frozen. But planning minister Ahsan Iqbal says that Islamabad could need up to $10 billion for repairs, with flooding having affected a third of the country.
Soaring food prices

The rains have damaged vast swathes of rich agricultural land and crops. Parts of Pakistan have been cut off from the rest of the country as flooding has rendered roads and bridges inaccessible — crucially, this includes areas in Pakistan's southern breadbasket.

Finance Minister Miftah Ismail said that the price of onions, a common ingredient in Pakistani meals, had increased by more than five times. The price of onions had already risen by 40% by Friday, the Pakistan Bureau of Statistics said.

The price of tomatoes, another essential ingredient in Pakistani cuisine, has also soared following the destruction of most of the crop. Lahore Market Committee secretary Shahzad Cheema told the AFP news agency that about 80% of tomato crop had been damaged.

Pakistani news portal Dawn cited the Ministry of Food Security as saying that the sowing of the second crop of tomatoes and onions was about to start in the southern provinces of Sindh and Balochistan. Planting will now have to be delayed, with the first crop having been damaged.

Dawn cited Manzoor Wassan, agricultural advisor to the Chief Minister of Sindh, as saying that chilli, cotton, rice and date crops had also been destroyed.

Pakistan's finance minister said that the government was trying to find ways to stabilize prices, including importing from neighboring India.

"We need to consider getting some vegetables over the land border," Ismail said in an interview for the Geo News broadcaster. "We have to do it because of the kind of prices and shortages we are experiencing... Inflation has broken people's backs."

Islamabad and New Delhi have long been regional rivals, having fought three wars since Britain relinquished imperial control of India and established Pakistan in the process in 1947.

The IMF announced the release of $1.17 billion in funds to Islamabad on Monday, as part of a government bailout loan from 2019. Final payments had been withheld as the previous administration of Imran Khan did not cut energy subsidies as the IMF had demanded.

Planning Minister Ahsan Iqbal said that the recovery could cost at least $10 billion, far beyond the funds provided by the IMF.

"I think it is going to be huge. So far, [a] very early, preliminary estimate is that it is big, it is higher than $10 billion," Ahsan Iqbal told Reuters.

"Massive damage has been caused... especially in the areas of telecommunications, roads, agriculture and livelihoods," the minister told the AFP news agency in separate comments.

Prime Minister Shehbaz Sharif wrote on Twitter that the IMF programme could only be a first step.

"Revival of IMF program, though critical to our economy, is not an end in itself. It offers a pathway to reorient our economy," Sharif said. "We will have to work hard to make it self-sufficient. Pakistan must break out of economic straitjacket, which is only possible through structural reforms."

The United Nations and Pakistan are set to appeal for $160 million in emergency funding for nearly half a million displaced victims. Last week, the UN said it had allocated $3 million for the disaster response in Pakistan.