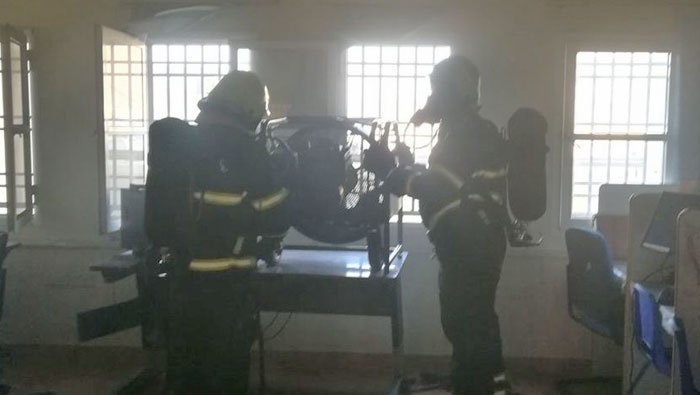 Muscat: A serious fire at an all-girls school resulted in 14 people being treated for smoke inhalation and prompted safety warnings over air-conditioning units.
Three staff members tackled the blaze, at a school near Nizwa just before 7am yesterday, before fire crews arrived at the scene to put it out. Pupils were kept in the playground.
Eleven pupils and three staff members from Um Fadhil Primary School Birkat Al Mouz, near Nizwa, were taken to hospital with minor to moderate injuries, according to rescuers.
**media[761856]**
The fire has prompted emergency responders and safety experts to issue warnings on how to prevent a fire in an air conditioning unit – the cause of the latest fire at the school.
All 14 people have since been discharged from hospital, according to the Public Authority for Civil Defence & Ambulance.
“The Civil Defence team managed to control and extinguish the fire with 14 cases of injuries ranging from medium to simple,” the PACDA spokesman confirmed.
Aisha Al Sulaimi, the head of the school, said parents, administrators and teachers involved with the school were very concerned with the situation.
“According to the final examination of the cause of the fire, the reason given was a short circuit in the air conditioner,” she said.
The school includes 635 students, 64 teachers and 12 administrative staff. The technology department will begin checking the validity of the equipment and clean it today, but the painting and other measures have not been assigned a start date.
“Last year, a fire broke out in the learning resource centre and the administrative room, and this year, smoke rose from one of the school’s electricity sources, but we managed to control it.”
Because the fire took place so early in the morning, there was no loss of life to report, but Al Sulaimi revealed that the situation could have been much worse.
“The fire took place at 6:15am, so there were very few students in the school, and they hadn’t yet entered their classes,” she recalled.
“The fire happened in the learning resources room, and the students were in the playground just outside it, and they were affected by the thick smoke rising from the fire. Some students have problems with allergies and asthma and were therefore affected by the smoke, and they needed treatment after trying to put out the fire.
“The situation at the school has become difficult and the possibility of students coming to school to study is not feasible, because we have no electricity.”
The school is located in the town of Birkat Al Mouz, in the Dakhiliyah Governorate, about 133 km from the capital, Muscat.
“The fire was caused by an electrical short circuit in the learning resources room,” revealed Dr. Yaqoub Al Nadabi, deputy director of the Directorate General of Education in Al Dakhiliya Governorate’s department for administrative and financial affairs.
“The fire occurred only in one part of the classroom, and the cases we found in the people relate to suffocation, but the students were discharged from the hospital after they were reassured of their health condition.”
PACDA and a health and safety expert in Oman have warned residents over the danger of split air conditioning units and safeguarding against electrical fires. A PACDA spokesman said: “As a result of the accident, 14 people were injured with minor to moderate injuries as a result of smoke inhalation. Emergency medical care was provided to them by ambulance personnel and then transferred to Baraka Banana Health Centre and Nizwa Hospital.”
The spokesman stressed that electrical equipment must be switched off whenever premises are vacant, adding: “The Authority calls upon the importance of complying with the safety requirements and ensuring the closure of electrical appliances before departure.”
Irshad Abdulmajeed, from the Fire and Gas Detection department at Safety Oman, said: “Royal Oman Police requirements state that smoke detectors have to be fitted in all rooms. There needs to be a centralised panel to operate these, and all the bells and alarms need to be heard clearly across all rooms, and this includes the assembly points outside as well.
“Whenever any smoke is released, these detectors will sound, and the panel will show you where this fire is taking place. This panel must be located near an entrance, so that it can be easily accessed and monitored. We have done installations in lots of educational institutions, and a detection system is a must,” he added.
“With ACs the most common problem is a faulty cable, because it is unable to take the load of the air-conditioner, and that is what causes a short circuit.”
AC manufacturers often include a list of instructions to be followed with their units, and these have to be clearly followed. To ensure that there is no short circuit likely to take place, these ACs must be inspected properly on a regular basis. It is also important that schools have trained fire wardens who know what needs to be done in such a situation.
“In all the floors, there needs to be an evacuation plan mentioned,” explained Abdulmajeed.
“This is part of quality checks. Exit boards should be present everywhere, and all these lights should be activated when the electricity goes off in case of an emergency. All these access lights will be lit so that the people can safely go out.”