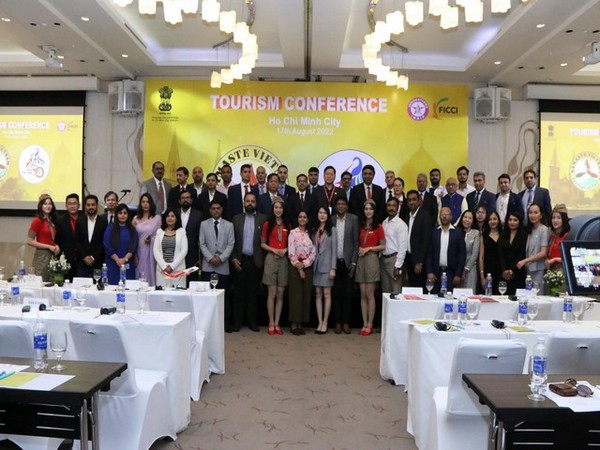 Singapore: Last week, at India-Vietnam Tourism Promotion Conference held on August 17 in Ho Chi Minh City, government officials and industry representatives from both countries met to discuss how they can promote inbound tourism from India.

Organised by the Consulate General of India in Ho Chi Minh City, the meeting was graced by Pham Van Thuy, Vice Chairman of the Vietnam National Administration of Tourism (VNAT) and Pranay Verma, the Indian Ambassador to Vietnam. Recognising that business connections between travel firms in both countries are crucial to growing the travel market in Vietnam, 34 travel companies from both countries held discussions and exchanged tourism information to drum up demand for travel by Indians to Vietnam.

Besides leisure travellers, Vietnam is keen to promote itself as MICE (meetings, incentives, conferences, exhibitions) destination and also as an overseas wedding venue.

Vietnam has been actively encouraging Indians to visit their country through a series of bilateral conferences and other activities including sponsored trips for businesses. VNAT is hoping that these activities will enable its travel industry to tap into a market which has a population of 1.4 billion.

In his speech, he pointed out that the number of Indian visitors to Vietnam remains modest and an important way to boost this is for better connectivity between the two countries.

Direct flights between cities are a key factor to promote travel as travellers do not usually enjoy sitting in the airport transit area of a third country, sometimes for hours, waiting for a connecting flight. A direct flight between an Indian city and a Vietnamese one takes about five to six hours but connecting via Bangkok or Singapore could double the travel time to 10 or 12 hours.

Vietjet Air recently announced that they will be flying from the Vietnamese city of Da Nang to New Delhi and Mumbai. Da Nang itself is well known for pristine sandy beaches but it also conveniently connects to the ancient city of Hue and the quaint and pretty old town of Hoi An. Hue is well-known for its well-preserved ancient city with city walls and was the seat of Nguyen Dynasty emperors and the national capital from 1802 to 1945.

Before the COVID-19 pandemic forced a global travel hiatus, Vietnam welcomed about 170,000 Indian visitor arrivals in 2019.

This placed India in 16th place among international source markets for Vietnam.

Tourist arrivals to Vietnam reached an all-time high in 2019 when it received 18 million visitors. During that year, the top country from which visitors came was China with 5.8 million arrivals, making up 21 per cent of the total. This was followed by South Korea with 4.3 million, Japan (952,000) and Taiwan (926,000).

With the major traditional travel market for Vietnam still in various degrees of COVID enforce travel controls due to their strict disease mitigation policies, it is, therefore, no surprise that Vietnam is keen to explore new markets.

In this regard, success has been mixed when compared with its neighbours.

Since opening quarantine-free in the middle of March, Vietnam has attracted 602,000 tourists for the first half of the year. During the same period, Thailand had 2.2 million tourists, Malaysia 2 million, Singapore 1.5 million and the Philippines 814,000.

Vietnam is aiming for five million foreign visitors this year, around 30 per cent of pre-pandemic levels.

Besides a lack of flights, the other obstacle cited by industry professionals is the strict visa policies.

Pham Ha, CEO of Lux Group, a luxury cruise operator, told Vietnamese online newspaper VN Express, "Many foreign tourists had cancelled their trips to Vietnam as they could not get an entry visa. These current visa policies are major barriers to Vietnam's tourism recovery."

Vietnam has resumed its pre-pandemic visa exemption policy only for 13 countries including Western European markets with a maximum stay of up to 15 days. For other markets, including India, it only issues a one-month single-entry e-visa, instead of three-month visas like before the pandemic. Visa on arrival is also not available to visitors except those travelling on business.

The e-visa must be applied for online and can take up to seven working days to approve.

Despite the hurdles, Indians seem to have taken to this non-traditional destination.

Earlier this month in New Delhi, at the Outbound Tourism Summit organised by the Federation of Indian Chambers of Commerce and Industry (FICCI), Vietnam's envoy to India, Pham Sanh Chau, told those at the event that visas issued by Vietnam to Indians have surged 24 times.

"Prior to the pandemic, we used to issue 250 visas per day in India. However, recently we issued 6,000 visas in a day," Pham said.

"Vietnam is seeing an uptick (in interest) not just from corporates, but also families, young professionals, millennials and couples. Indians are open to a shift in destinations to those that offer convenient short-haul access and (are) easier on the wallet."