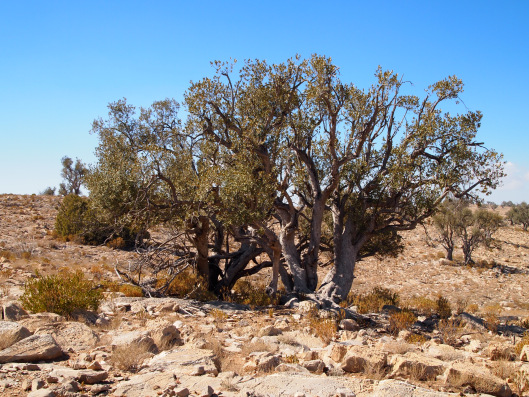 Oman is nature’s unadulterated gift to mankind. The plains, plateaus, and mountains of the Middle East’s second largest country each have a different story to tell. They are ancient and mysterious, and interwoven with the life and culture of the Omani people. I was lucky enough to meet one such Omani on the peaks of Jebel Akhdar, Ali Al Abri, a young concierge at the Alila Hotel, who became my guide, teaching me about the gnarled gifts growing on the Green Mountain.

Ali was familiarising me with the place, taking me around showing the picturesque landscapes, into tiny villages, and onto the cliffs overlooking the steep valleys. The further into the mountains we went, the more the name “Akhdar” or “Green” seemed like an understatement. Every inch of the mountain was filled with fresh, natural colours — breathing life into the rugged place.

While admiring the beauty of our surroundings, I began spotting what looked at first glance like conifers. As I saw more and more of them, I realised they were something different, like knotted, misshapen Christmas trees. I asked my guide, and he told me they were Juniper trees, one of the most prized flora on the mountain. Located in small areas of the Hajar Mountains, these shrubs, which grow to become huge trees, range from a few hundred to over 3,000 years old. Very sensitive to altitude, environment, and temperature, the wild trees cannot be cultivated. Unsurprisingly, these mystical trees are some of the most endangered in the region. Thus they require special protection and preservation by the Ministry of Environment.

The existence of Juniper trees in Oman dates back centuries, and up until recently, every part of the Juniper tree was used by local people: The tree bark was used for constructing houses, especially the ceilings of homes in the villages of Jebel Akhdar; the odour from the leaves, and berries were used as a natural insect repellent; and extractions from the bark of the tree were burnt and used to perfume homes, like frankinscense.

These trees are found in Oman, Saudi Arabia, Persia, and in the Mediterranean, in some parts of Syria and Lebanon. Across the region, forests that used to be densely green due to the presence of Junipers are now losing their greenery predominantly because of soil drifting, deforestation, forest fires, and over grazing. And once cut, these trees will not grow back easily. Many ecologists and environmentalists have said that growing Junipers is nature’s unshared secret. Birds feed on the spicy Juniper berries and excrete the seeds out into the soil. Only if the seeds are dropped in an environment that is favourable for it to grow, which is rare, will it take.

Hence nowadays, Juniper trees are not used as much in construction, though the leaves (whose removal causes no harm to the tree) are still harvested for their valuable medicinal properties, thought to cure everything from toothaches to burns to heart illnesses. The extractions, converted into Juniper water, are also used as painkillers by many villagers. The berries are used in limited quantity for their intoxicating scent in the soaps and beauty treatments at the mountaintop Alila Hotel.

As we wove our way back down the mountain, I tried to count the mystical pines, whose twisted branches seemed to wave at me. As we drove, I marvelled, yet again, at the gifts and secrets that seem to inhabit these ancient lands.
— [email protected]