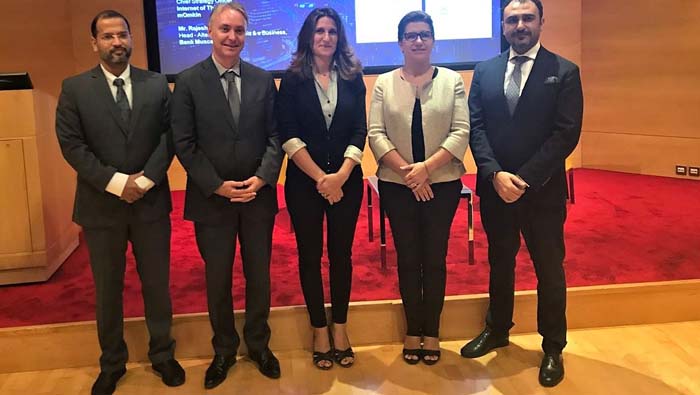 Muscat: The future has arrived in Oman as network infrastructure required to implement the Internet of Things (IoT) is now ready and companies willing to enhance their operations using this technology can approach Omantel for it, an official from Omantel told the Times of Oman.
IoT is a digitisation technology that allows different devices to be connected to the network and gather data, which can be further analysed and used to increase efficiency of operations through Artificial Intelligence (AI) applications. Oman became the first country in the Middle East to have a dedicated IoT network when it partnered with French IoT network pioneer Sigfox to implement its technology.
Speaking at the Omani French Association Seminar on IoT, Fadi Nasser, general manager of ICT business at Omantel said 6,000 towers and low powered devices cover more than 80 per cent of Oman and companies can directly plug and play into this network.
“We are ready. This is the beauty of it. You name the used case with exemption of some really corner cases. We can pretty much do everything. Not as Omantel, but we have an ecosystem of local and global players. We can put together the sensors, we have the platform,
we have the network,” he said.
“The network has been in put in place in 2016-2017. We have over 80 per cent of coverage in the Sultanate and we are ready for business. We are talking to ministries, Oman beah and a lot of pilot projects are going on currently.”
The inexpensive wireless IoT network built by Sigfox utilises a wide reaching signal that requires little energy and connects low energy objects, such as smart watches, which are continuously on and emitting data. Sigfox enables sensors to function without the need for
batteries, which nullifies the use of maintenance. Moreover, it allows reduction in the use of silicon and makes a module cost only a few dollars, therefore rendering the technology economical to implement.
As data captured by these devices can hold personal information, security of this data and network breach threat is a growing concern for people. Nasser said this is the reason why a dedicated network in the country is necessary.
“We can’t have this information given away abroad. It may contain sensitive information so as Omantel, who have offered network infrastructure for some of the most sensitive infrastructure in the country, we had to step up to match the demand for a need for wireless IoT network provider. We have ICT infrastructure for security systems in place and as IoT connects thousands of everyday devices, this is highly sensitive. As we already have proven systems in Oman,” Nasser said.
As IoT devices can capture data from thousands of devices every day, it can be used to build smart cities in Oman that can utilise this data to enhance the living standards of residents. Applications, such as brightness and temperature control in rooms, smart traffic flow and
parking, preventive maintenance, security entry into critical areas, smart metering, etc. can all be a reality once captured data by devices, such as cameras and sensors, can be analysed.
“When we talk of mixing IoT with big data with AI, the integration of the three is not ready and may take another couple of years. We do have a big data and an AI platform. We have invested with IBM to understand our clients better and to offer real time analytics on how much to spend and how many times to go to a certain place. We got that and the IoT infrastructure. Integration of the two where you compound the value isn't ready yet but right now if you want to monitor a system remotely, we have it sorted.”
Nasser was speaking at a forum organised by the Omani French Association (OFA), which organises several seminars on technology and economy of Oman, with an aim to provide a platform that promotes friendship, understanding on matters of mutual interest between France and Oman. The seminars can be attended by members of the association.