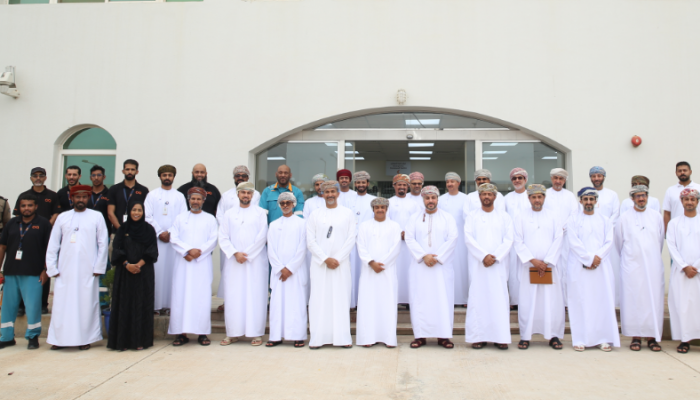 Muscat: The Governor of Dhofar, His Highness Sayyid Marwan bin Turki Al Said, paid a visit to OQ, the global integrated energy company, assets in Dhofar Governorate on August 10, 2022. During his visit, he was briefed on the assets and investments of the company.

He was also briefed on the Group's contributions towards promoting self-sufficiency in its products, through export of the surplus to global markets and its support to the government's economic diversification policies and plans. His Highness was also updated on the Group's role in enhancing the In-Country Value (ICV) through its projects, which enrich local markets and foster small and medium enterprises (SMEs), as well as the operations and plans to increase production.

His Highness toured the various OQ assets and was also briefed on the Methanol Plant central control unit.

Lauding the Group’s achievements and ambitious plans, His Highness said: “I am happy that my visit to OQ today has provided me with the opportunity to closely monitor the Group’s investments in Dhofar Governorate. I am highly impressed by the investment projects taking shape in the energy and petrochemical sector in this precious part of our dear homeland.

"The progress made in the development march under the leadership of His Majesty Sultan Haitham bin Tariq is the outcome of the sincere efforts and hard work made to augment the growth of our national economy in order to meet the desired aspirations and goals”, he added.

He pointed out that the industrial plants, which are a source of pride for all, reflect the role played by talented Omani human resources to maximize the ICV and promote the growth of all economic and business sectors in all regions of the Sultanate.

The Governor of Dhofar also praised the great role played by national cadres in realizing these huge achievements, which will undoubtedly contribute to raise the ICV, promote the growth of SMEs and enhance Omanization rates.

He affirmed that the government would spare no efforts to provide OQ Group with the necessary resources to complete future projects that serve the development process and open up new horizons for development and prosperity of the country.

“I am really happy with the developments here as they reflect the great efforts made by OQ Group to promote manufacturing industries, add value to its projects and enrich local markets, he noted.

“We hope that these investments would contribute to achieving a qualitative leap for the national economy, creating job opportunities and promoting creativity and innovation. I am sure that the investments and projects completed in Dhofar Governorate would enhance the efforts made in the energy sector in the Sultanate of Oman in accordance with Oman Vision 2040”, he concluded.

For his part, Talal bin, Hamid Al Awfi, CEO of OQ Group, expressed his happiness over the visit of His Highness the Governor of Dhofar to the Group.

He pointed out the importance of His Highness' visit to the OQ Group in Dhofar Governorate, which is considered a link between the Sultanate of Oman and East Africa.

"His Highness's visit will have a great positive impact on the Group and its employees. The visit will give us the motivation to carry out more investment projects in Dhofar. The visit is a good example of true public private partnerships (PPPs)”, he added.

The CEO of OQ Group pointed out that the Group's products, which reach more than 70 countries, effectively contribute to achieving the government's economic diversification policies and plans. The Group plays an important role in creating direct and indirect job opportunities for Omanis, enhancing ICV, supporting the growth of SMEs and enriching the local communities near the Group sites.

Salalah LPG plant is one of the most important energy projects that contribute to improving the gas value chain of the Sultanate of Oman. The plant, whose investments stand at about OMR 318 million, produces 8. million standard cubic meters per day of light gas and about 304,000 tons per year of LPG products. The daily production of the methanol plant is 3000 metric tons per day, while the production capacity of the ammonia plant is 1,000 metric tons per day. OQ gas pipelines also supply gas to electricity networks, factories, economic zones, and achieve self-sufficiency in natural gas in the Dhofar Governorate.

His Highness the Governor of Dhofar also toured the OQ Social Investment Projects Exhibition. The Exhibition demonstrates the development programs and initiatives carried out by the Group in the areas of education, health, economic prosperity and environmental excellence to turn the aspirations of the local community into reality.

It is noteworthy that the Group is implementing a number of social investment projects in Dhofar Governorate, including the establishment of the Dhofar Autism Center, Dhalkut Cultural Center, Dhalkut Road Protection Project, and the Chemistry Research Laboratory.