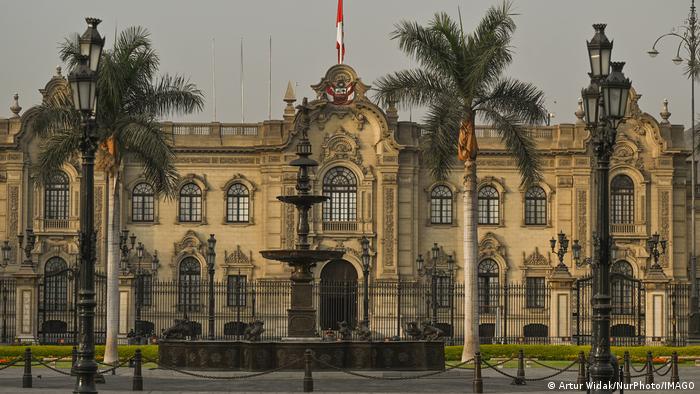 Police and public prosecution agents searched the presidential palace in Lima on Tuesday after they had acquired an arrest warrant for Yenifer Paredes, the Peruvian president's sister-in-law, for alleged corruption and money laundering.

The raid has since been heavily criticized by the president, Pedro Castillo, who accused the Attorney General's Office of intending to "break the constitutional and democratic order" in the country.


Such a police operation is unprecedented in the country.

The prosecutor's office had requested a "raid" of the "residential area of the government palace," the Court of Justice said in a statement.

The search lasted for almost four hours, but the agents were unsuccessful in locating Paredes, who is assumed to be running from the law. She is being investigated for her alleged illegal involvement in a sanitation project in Cajamarca, the president's native region.

The 26-year-old has been living in the presidential residence within the government palace with Castillo and his family.

Several other judicial raids were taking place simultaneously in other locations around the capital, with a mayor and two businessmen arrested for alleged involvement in the same corruption ring.

Paredes had already been summoned to testify before the public prosecutor's office and to appear before a commission of the Peruvian Congress in mid-July.


Castillo heavily criticized the raid on a televised broadcast.

"Those who seek to break the constitutional and democratic order are the same ones who reported a non-existent electoral fraud to disregard my election," Castillo said in a speech after describing the raid on the presidential residence as "illegal."

"It is evident there is a conspiracy between a part of the Congress, the Attorney General's Office and a sector of the press to destabilize the democratic order," he claimed after learning of the preliminary arrest warrant against Paredes.


Castillo took office in July 2021. His current disapproval ratings among the public lie around 74%, as opinion polls report. The public prosecutor's office has five open investigations against him, including one for corruption.

Earlier Tuesday, a parliamentary report recommended disqualifying and criminally prosecuting the president over his alleged consideration of a proposal to allow landlocked Bolivia to access the sea through Peru. Castillo has denied this allegation.

Paredes isn't the first person in Castillo's close circle to be investigated by the public prosecutor's office. A nephew who acted as an adviser, a former transportation minister and his former presidential secretary have all attracted the interest of law enforcement.