South Al Batinah most affected by heavy rains in Oman 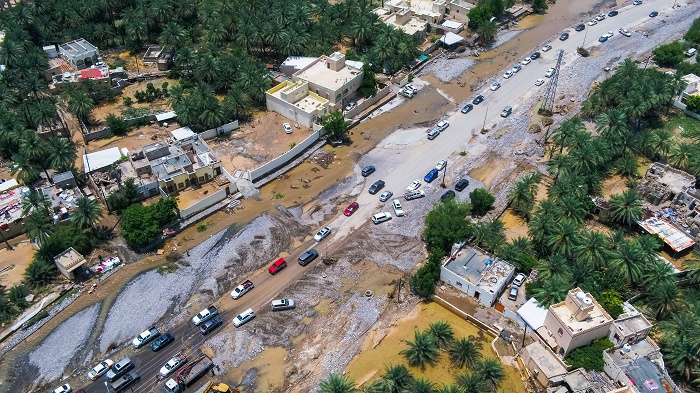 Muscat: Heavy rains were recorded in most of the wilayats of the Sultanate on Monday which led to overflowing of valleys affecting private and public properties.

Hammoud bin Mohammed Al-Mandhari, coordinator of the relief and shelter sector in the National Committee for Emergency  Management (NCEM), speaking exclusively to Times of Oman said, “The wilayats most affected were Al-Awabi and Al-Rustaq, where Wadi Bani Kharus and Wadi Bani Khazir were brimming with swiftly flowing rain water.”

He added:”As a result, many homes and private and public properties located in the vicinity of these valleys were damaged.”

Elaborating on the relief measures, Al-Mandhari said: “Three shelters were equipped and made functional at two centres in the Wilayat of Rustaq and one in the Wilayat of Al-Awabi, where the affected families and residents were shifted.”

He added: “The torrential rains and the overflowing wadis caused damage in the areas close-by and entered homes. The affected families are being transferred to the shelters with the help of Royal Oman Police (ROP) and other authorities.”

Al-Mandhari further said: “The current rainfall, especially on the mountain tops, worsened the condition leading to strong currents in the valleys causing damages to homes and public and private properties.”

He added: “There are power and internet outages in the affected areas, and this will continue for a while as the rains are still continuing and, I believe, the water level of the valleys will increase with time. So, I call on everyone in these areas to exercise utmost caution and heed the warnings and instructions of the competent authorities.”

He also called on everyone to stay away from valley streams and not to risk crossing them or getting into contact with electric poles. Al-Mandhari said the shelter and relief sector is ready to provide additional shelters, if necessary.

The Civil Aviation Authority (CAA ), said on Tuesday: “Chances of cumulus clouds formation continue today and tomorrow over the Al Hajar Mountains and adjacent areas, with chances of thunderstorms of varying intensity accompanied by increased flow in the valleys. So, please be careful while the valleys are overflowing.”

Mohammed Al Wardi, an academic and economic analyst, said: “It seems that the Sultanate will become subject to many violent climatic fluctuations such as cyclones and depressions due to global climate changes, which will damage infrastructure and property, causing economic losses to the government and citizens.”

He added: “This calls for developing comprehensive strategic plans to live with it to prevent the recurrence of losses and tragedies.”