Rain-affected basic services almost back on rails in Oman 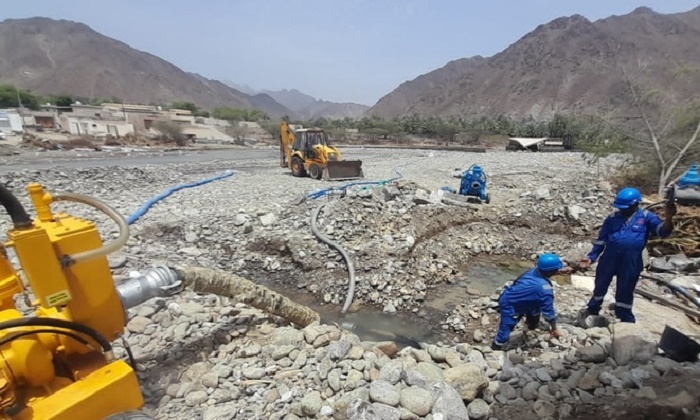 Khasab: With most basic services restored in the rain-hit areas, the National Committee for Emergency Management (NCEM) has announced the termination of the sub-committee for the purpose, in the Musandam Governorate.

However, even after the termination of the sub-committee, the authorities concerned continue to restore the remaining services in the region, Oman News Agency (ONA) said in a statement.

The basic services sector in the governorates of North Al Batinah and Musandam is working round-the-clock to restore the left-over services in areas affected by the recent weather conditions.

Restoration work helped open 97 per cent of the asphalt roads and 95 per cent of earth roads in the North Al Batinah Governorate. All these roads had been affected badly by the overflowing wadis and debris from the mountains in the Governorate.

As for Musandam Governorate, the percentage of asphalt roads restored is 95 percent and earth roads 48 percent. Electricity services were also restored in all the wilayats of the Musandam and other governorates.

In the telecommunications sector, services are working at their full capacity, and the percentage of restoration in water and sanitation sector has reached 99 percent. However, work is still underway in the wilayat of Madha in Musandam Governorate to restore water distribution network, which is only 75 percent complete.

The remaining subscribers are being supplied water in tankers. In the wilayats of Khasab, Dibba and Lima, 100 percent of water services have been restored, however. Fuel is available in all states of Musandam Governorate.

Meanwhile, the Waste Management Department of the basic services sector in Musandam Governorate is working at a rapid pace to restore all its services in various regions of the governorate that were affected by the weather conditions.

Ninety-nine percent of waste disposal services were restored in the wilayat of Khasab, with the exception of 11 containers, as the street is currently blocked.

In the wilayats of Bukha and Dibba, 100 percent of the services have been restored including those in the marine areas. There has been no loss of containers.

The number of containers that were washed away by the wadis in the wilayat of Lima has reached 21 with a capacity of 240 litres each, and the service was restored at 100 percent, using waste bags.

Many  containers were swept away by wadis in the wilayat of Madha but the service was restored at 99 percent.