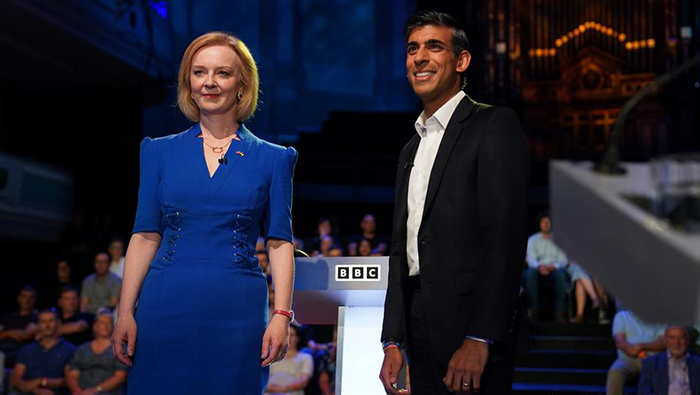 London: The UK's ruling Conservative Party has sent ballots to members, who will decide who becomes the country's next prime minister in its leadership contest.

The successor to outgoing prime minister Boris Johnson — who was forced to resign after a string of scandals — is likely to take the party into the next election, currently scheduled to be held no later than 2024.

The hunt for a new prime minister was triggered on July 7 when Johnson announced his resignation, brought about by dozens of resignations from government ministers and aides.

Conservative lawmakers whittled down a wide field of candidates to Liz Truss and Rishi Sunak, with an announcement of the decision by party members due on September 5.

Some 154,500 people were registered and eligible to vote in the last leadership election, in which Johnson claimed a convincing victory. The party has said the number has increased in the past three years, however without providing specifics.

It's thought that there are between 180,000 and 200,000 members of the Conservative Party at the moment. They will decide on the new prime minister for the UK population of more than 67 million.

Two candidates — Liz Truss and Rishi Sunak — are vying to be the new face of British Conservatism; both of them held prominent jobs in Johnson's Cabinet up to the week when he resigned.

From the start, observers considered the 42-year-old to be one of the front-runners in the race to succeed his old boss. However, his perceived betrayal of the outgoing prime minister is a possible drawback, with a substantial amount of the party membership thought to remain fans of Johnson.

Sunak has sought to portray himself as the sensible candidate with more centrist positions and a more cautious economic approach. While he says he would like tax cuts — of 20% by 2029 — he also says now is not the time.

Born to Indian parents who moved to the UK from East Africa, Sunak was the head boy at the exclusive Winchester College private school and later studied at Oxford. His elite education and work in investment banking could make him seem out of touch with ordinary voters.

As a student, he famously said in a 2007 documentary about the UK class system that he had no working-class friends.

Like Johnson, Sunak was also fined by police for attending a lockdown-flouting birthday party. He also faced negative headlines recently when his wealthy wife's non-taxpaying status in the UK was widely reported, prompting the couple to voluntarily pay as if she were an ordinary British resident.

His campaign has complained of dirty tricks by Truss's team, amid the leaking of government documents that have dogged his bid.

Should Sunak win, he would be Britain's first non-white prime minister.

The 46-year-old stood is thought to enjoy considerable support among the Conservative Party faithful and has polled better than Sunak in surveys.

Part of the reason might be Truss's own attempts to portray herself as a latter-day Margaret Thatcher, often appearing in similar photo poses and clothes as the UK's first female prime minister.

Another point for support might be her promise to deliver immediate tax cuts, if she is elected.

As a seven-year-old in 1983, Truss — the daughter of left-wing activists— played the role of Thatcher in her school's mock elections (yet couldn't garner a single vote).

Later, she became a member of the centrist Liberal Democrats before switching across to the Tories.

She was initially a candidate in the 2019 Conservative leadership race to succeed Theresa May, but ultimately stepped aside to endorse Boris Johnson.

It's believed that she has been carefully cultivating her leadership credentials ever since.

Truss took on the role as the UK's top diplomat in September after serving as trade minister. Although she campaigned for the UK to remain in the EU, Truss has become a champion of Brexit, having signed a string of post-Brexit trade deals in her former role.