Al-Zubair, Schiller, Jeffries and Morad forced to retire after leading Silver Cup at 24 Hours of Spa 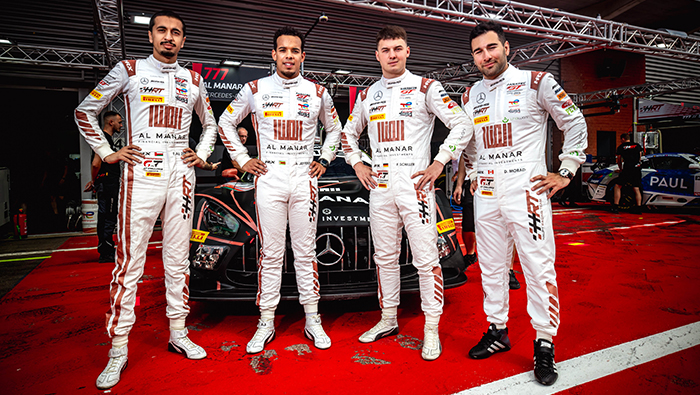 Spa-Francorchamps: Oman’s Al-Faisal Al-Zubair and team mates Fabian Schiller, Axcil Jeffries and Daniel Morad were forced to withdraw from the 74th edition of the TotalEnergies 24 Hours of Spa after 58 laps and under three hours of racing.

Schiller and Al-Zubair had dominated the early exchanges in the Silver Cup category and been running as high as sixth overall when Théo Nouet’s Beechdean AMR Aston Martin was beached in the barriers at Les Combles and this required an immediate full-course yellow flag. 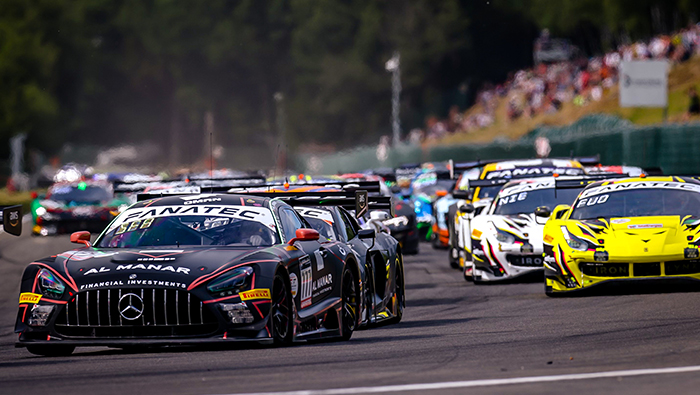 Unfortunately, Al-Zubair was unable to slow in time and slammed the Al-Manar Racing by HRT Mercedes-AMG GT3 into the rear of the slowing Allied Racing Porsche (#74) and the damage meant the Omani could not continue.

Victory on the flagship round of the 2022 Fanatec GT World Challenge Europe Powered by AWS eventually fell to the series-leading Team WRT Audi of Benjamin Goethe, Thomas Neubauer and Jean-Baptiste Simmenauer, who completed 533 laps just ahead of the Attempto Racing Audi of Marius Zug, Juuso Puhakka, Nicholas Schöll and Alex Aka.

Al-Zubair said: “It was a very tough race. It started amazing. It was the best qualifying of my life so far, Q1 and pole position for myself. Then, with the team average we made it into Super Pole with all the Pro drivers. We were in the top 20 and there were 25 Pro Cars.

“Fabi (Schiller) started the race in P8 overall, which was amazing. We had a really good stint and moved into P6. During my stint, there was a full-course yellow where we usually have to be 80km/h at the one-second mark before it gets to zero.

“But, unfortunately, at 10 seconds, am amateur driver was in front of me and, once he heard the course yellow call, he slammed on the brakes and, at that speed, it was too late to manoeuvre around  or do anything and we had quite a big impact and the race was over for us. This was definitely a tough pill to swallow. Hopefully better the next time.”

After a competitive warm-up session, the Al Manar Racing by HRT Mercedes was guided to the fastest lap of 2min 16.774sec in the Super Pole session that preceded the start of the 24-hour race. They recorded the ninth fastest lap behind eight Pro Cup cars and were well ahead of their Team WRT series rivals on the grid.

Schiller made a great start and were able to move up from third to the Silver Cup lead shortly after the hour mark and maintained the early initiative from Team WRT and Emil Frey Racing.

Al-Zubair took over at the start of the third hour and retained the lead from Team WRT and the Garage 59 McLaren. But that all ended on lap 59 with the aforementioned accident.

A short pre-qualifying stint preceded four short 15-minute qualifying sessions. The Al Manar Racing by HRT Mercedes team delivered a stunning performance in Q1 to top the times with a lap of 2min 18.147sec, which put them 0.182 seconds in front of the Attempto Racing Audi.

Another scintillating Q4 stint gave the Al Manar team the second fastest overall lap of 2min 16.612sec and that was sufficient to put them third on the grid of the Silver Cup runners, behind the pole-winning Emil Frey Racing Lamborghini and the second-placed Team WRT Audi of Jean-Baptiste Simmenauer, Benjamin Goethe and Thomas Neubauer, when the four sessions were combined.