'RIP An An': Love pours in from around world after oldest male giant panda dies 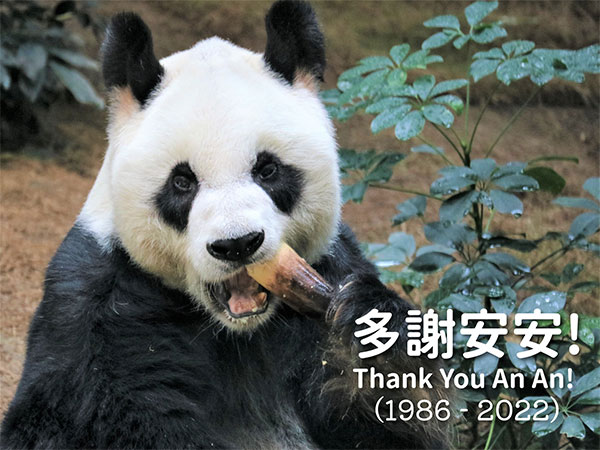 Hong Kong: Messages of grief poured in from around the world after news broke about the death of An An, the world's oldest male giant panda.
An An died in a Hong Kong theme park on Thursday following health problems at the age of 35, the equivalent of 105 years in human age. "We are deeply saddened to announce the loss of centenarian panda An An, the world's longest-living male giant panda under human care, today (21 July, 2022). An An lived a full life that ended at the respectable age of 35 - the equivalent of 105 years old in human age," the Ocean Park Hong Kong said in a Facebook post.

The theme park authorities said that An An's health deteriorated slowly but progressively in the past few weeks with a severe decrease in physical activities and food intake.

"His condition reached a humane endpoint that based on animal welfare reasons, veterinarians from Ocean Park and the Agriculture, Fisheries and Conservation Department made the difficult decision to perform the procedure of humane euthanasia on An An after consulting the China Conservation and Research Centre for the Giant Panda," the Hong Kong Park statement read.

The Park is hosting condolence books at The Hong Kong Jockey Club Sichuan Treasures. "If you are not able to visit in person, you can leave the condolence in the comment section on the pinned post to pay tribute to An An," it said.

After the news of An An's death spread on the internet, love poured in from around the world on the Facebook page of the theme park.

"Thanks for An An accompanying HK kids and even us! And most important is the caring love of the panda caretakers over the years! Your work is very appreciated! Thanks," Kg Last said.

Another user from the US, Judy McCoy-Chavira said, "One of God's most beautiful creatures..... rest in peace An An....to the staff that cared for you, may God comfort you during this most difficult time love & blessings from the US."
Alice Thunderland wrote, "Rest in peace and happiness, An An. Loving and missing you always." Pui Wang Tsui thanked An An for bringing happiness to the people of Hong Kong.

Giant pandas are hard to breed in captivity. However, after years of decline, their numbers have increased in recent years.

The species was upgraded from "endangered" to "vulnerable" in 2017 after its population grew nearly 17 per cent over the previous decade, according to International Union for Conservation of Nature (IUCN).