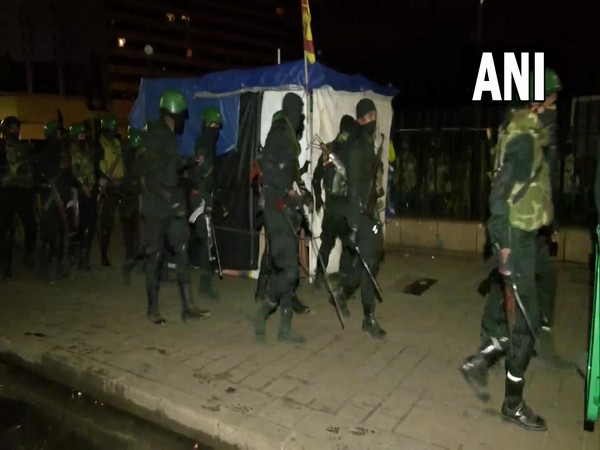 Colombo: A large number of protestors confronted armed security personnel as the latter set up barricades outside the premises of the Sri Lankan Presidential Secretariat in Colombo.

Protesters are alleging that security personnel raided the anti-government protest camp in the capital on early Friday.

"Ranil Wickremesinghe wants to destroy us, they are again doing this, but we will never give up. We want to make our country free of such nasty politics," said a protestor amid an armed forces crackdown.

Tents of protestors are being dismantled by the armed security personnel outside the premises of the Sri Lankan Presidential Secretariat.

As Sri Lanka scrambles to get back on track after the election of a new President, the people in the country -- who are facing severe economic hardship -- are still uncertain about the future.

Amid this uncertainty, Sri Lankans from across the country are lining up at the passport office in Colombo to get a new passport or get their old one renewed, desperate for a way out of the crisis-marred country.

"There is no food, no fuel and no money in the country. What will we do and how we will survive? I'm here to get my passport and go to Qatar for a job. People are here for this only," a person who is waiting in the queue told ANI.

Wickremesinghe was sworn in as President of Sri Lanka on Thursday in Parliament before Chief Justice Jayantha Jayasuriya.

He was elected as president in an election held in Parliament on Wednesday.

During Wednesday's vote, Wickremesinghe received 134 votes following the resignation of Gotabaya Rajapaksa from the presidency last week amid severe economic turmoil in the country.

Rajapaksa fled abroad after his palace was stormed by angry protesters amid the unprecedented economic crisis.

After his official residence in Colombo was stormed by tens of thousands of angry protesters last week, Sri Lanka's ex-president Gotabaya Rajapaksa fled the country to the Maldives before flying out to Singapore. Rajapaksa had offered his resignation after fleeing the country.

Sri Lanka's economy is bracing for a sharp contraction due to the unavailability of basic inputs for production, an 80 per cent depreciation of the currency since March 2022, coupled with a lack of foreign reserves and the country's failure to meet its international debt obligations.

Hundreds of Sri Lankans continue to queue up at petrol pumps across the debt-ridden country every day amid fuel shortage, and a large number of people are ditching their cars and motorcycles for bicycles for their daily commute.