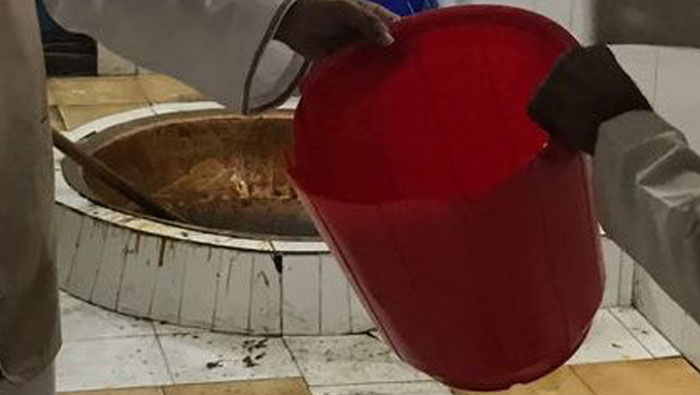 Muscat: A store in Oman, which made halwa using melting plastic buckets, has been closed down, the Ministry of Regional Municipalities has announced. A viral video posted online shows men in a shop, making halwa but using melting plastic buckets to transfer the mix from a large industrial bowl to a smaller plastic one.
Omanis reacted in horror to the video, which clearly shows the plastic bucket being used to transfer the hot halwa mix bending and melting as the men transfer the contents from one container to another. In a statement posted online, the Ministry of Regional Municipalities said the halwa shop that used plastic has now been closed down.
“The Ministry of Regional Municipalities caught and closed the halwa factory, which used plastic containers in a video that was circulating on the social media,” said the ministry. “The ministry stressed the need for all factories and halwa shops to comply with the requirements and specifications adopted, or else legal action will be taken against violators,” added the ministry.
One Omani, who had seen the video said: “It’s disgusting. You could see the plastic bucket degrading under the intense heat from the mix. All sorts of pollutants and plastic would have entered that halwa. That’s why it caused such a reaction, it’s just not safe. halwa must only ever be made and moved using metal containers.”