India will continue to stand by people of Sri Lanka: MEA 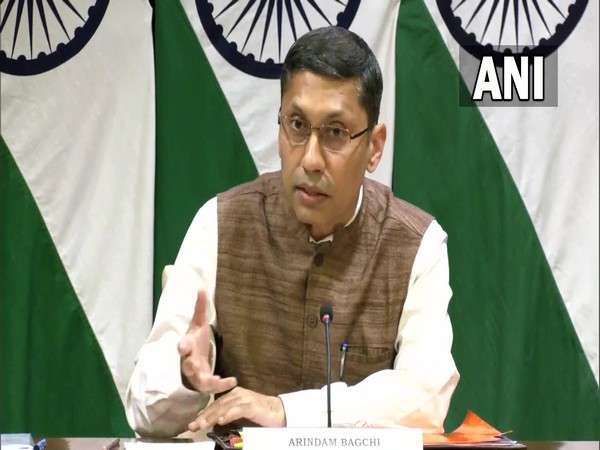 New Delhi: The Ministry of External Affairs on Thursday reiterated its stance to stand by the people of Sri Lanka at the time of crisis, saying that India has been at forefront of extending economic assistance to Sri Lanka and will continue to do so.

"India has been at forefront of extending economic assistance to Sri Lanka as per what they require and we are one of the countries that have provided the maximum amount of assistance at the time of need. We will continue to stand by the people of Sri Lanka in whatever manner we can," Ministry of External Affairs official spokesperson Arindam Bagchi said on Thursday while addressing a media briefing.

Responding to a media query about India's view on Sri Lanka restoring political stability under the new president, Bagchi said, "About the election of the new president, the High Commission had put out the statement that this was a parliament process they did. I don't have much to add except to emphasise that this transition happened through a constitutional framework and is a clear and positive indicator in that way."

"They have a new president and they will take steps ahead to set up a government. They had a discussion with the IMF. We have extended assistance in various ways, but some of it has not been fully utilized. So we will look at it that way," he said in response to a query if India is looking at a specific economic package for Sri Lanka at this time.

Earlier, the MEA spokesperson had said that India is Sri Lanka's closest neighbour and the two countries share deep civilizational bonds. India has stood with the Sri Lankan people in times of crisis and will continue to do so.

On July 16, Indian High cCommissioner Gopal Baglay called on the Parliament Speaker Mahinda Yapa Abeywardena. Baglay said that India will continue to be "supportive of democracy, stability and economic recovery in Sri Lanka". He appreciated Parliament's role in upholding democracy and the Constitutional framework, especially at this crucial juncture.

In pursuance of the central place that Sri Lanka occupies in our Neighbourhood First policy, India has extended this year unprecedented support of over USD 3.8 billion for ameliorating the serious economic situation in Sri Lanka.

India emerged as the first responder under Prime Minister Narendra Modi's Neighbourhood First policy when Sri Lanka was left alone by its so-called benefactors for funding support. India has responded with urgency to the government of Sri Lanka's request for assistance in overcoming hardships and will enhance economic linkages between the two countries be it through infrastructure connectivity and renewable energy.

India's disbursements of foreign loans and grants from January 1 to April 30, 2022, were USD 376.9 million compared to China which was only USD 67.9 million.

On Tuesday, External Affairs Minister S Jaishankar also said that Sri Lanka is suffering a very serious crisis and India has approached the situation in the neighbouring country in a very humanistic way as part of its Neighbourhood First policy.

Referring to USD 3.8 billion in support that India has given to Sri Lanka, he said "no other country has given this level of support". Sri Lanka is facing its worst economic crisis in seven decades.

Notably, Ranil Wickremesinghe was sworn in as Sri Lankan President at the country's Parliament on Thursday. Wickremesinghe received 134 votes in the Parliament vote following the resignation of Gotabaya Rajapaksa from the presidency last week amid severe economic turmoil in the country.

Earlier, Wickremesinghe was appointed as the interim president of Sri Lanka after Rajapaksa fled abroad after his palace was stormed by angry protesters.

Sri Lanka is suffering its worst economic crisis since gaining independence in 1948, which comes on the heels of successive waves of COVID-19, threatening to undo years of development and severely undermining the country's ability to achieve the UN's Sustainable Development Goals (SDGs).

The country's economy is bracing for a sharp contraction due to the unavailability of basic inputs for production, an 80 per cent depreciation of the currency since March 2022, coupled with a lack of foreign reserves and the country's failure to meet its international debt obligations.

Reduced domestic agricultural production, a lack of foreign exchange reserves, and local currency depreciation have fuelled the shortages. The economic crisis will push families into hunger and poverty - some for the first time - adding to the half a million people who the World Bank estimates have fallen below the poverty line because of the pandemic.