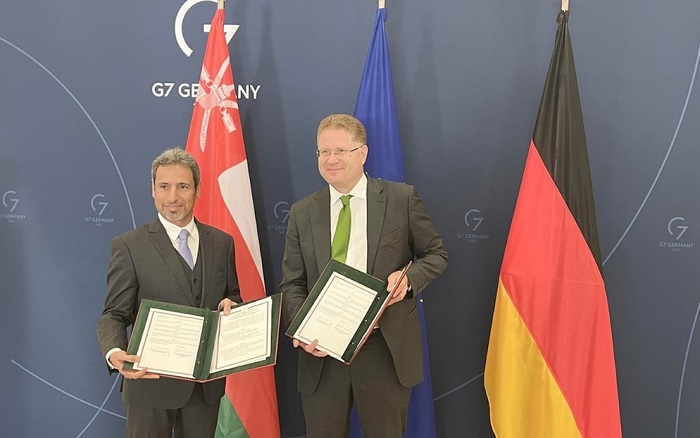 Berlin: The Sultanate of Oman and the Federal Republic of Germany have signed a declaration of intent for cooperation in the field of energy. The step would contribute to the exchange of technical knowledge, related integrated systems and smart networks.

The declaration of intent was signed from the Sultanate of Oman’s side by Eng. Salim Nasser Al Aufi, Minister of Energy and Minerals whilst it was signed from the German side by Dr. Patrick Graichen, State Secretary at the Federal Ministry for Economic Affairs and Climate Action.

The declaration was signed within the framework of the official visit of His Majesty Sultan Haitham bin Tarik to the Federal Republic of Germany.

The signing of this declaration fulfills the desire of the two countries to continue promoting their cooperation in the field of energy on the basis of mutual benefit, as the two countries are parties to the United Nations Framework Convention on Climate Change, as well as fulfilling their desire to establish a framework for the exchange of technical knowledge and advice, skills and expertise related to the field of energy.

The two sides reached an understanding on a number of topics that include encouraging cooperation in the fields of renewable energy technologies, their integrated systems and smart networks and energy efficiency, such as industry, buildings and transportation, green hydrogen and its derivatives, energy regulatory frameworks, research and market planning, with the aim of creating an attractive milieu to invest in energy transition technologies

The two sides also held a meeting touching on the existing friendship and constructive cooperation between the Sultanate of Oman and the Federal Republic of Germany. The two sides also discussed the major joint projects that the two countries aspire to achieve in the fields of energy, green hydrogen and its lucrative feasible derivatives in a manner that brings mutual benefits to them.

The meeting was attended by Khalid Hashel Al Muselhi, Head of the Foreign Minister’s Office Department, Thomas Schneider, German Ambassador to the Sultanate of Oman and officials from both sides.