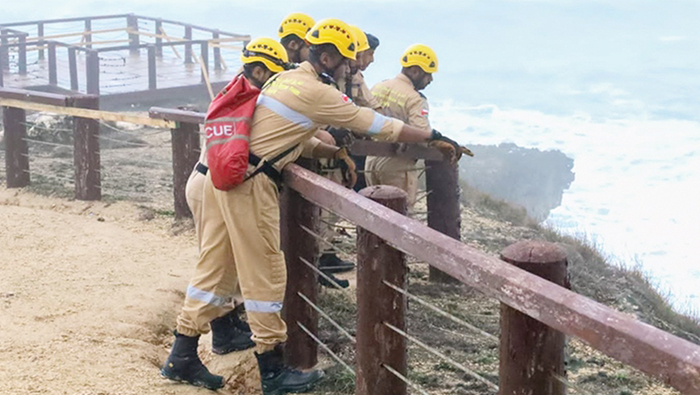 Salalah: The Search and Rescue Teams affiliated to the Royal Oman Police (ROP) and the Civil Defence and Ambulance Authority (CDAA), in cooperation with the military and security apparatuses, continue their search for the four missing people in Dhofar Governorate.

Brigadier Mohammed bin Nasser Al Kindi, Director General of Operations at Royal Oman Police said that the efforts of rescue resulted in picking two bodies from Al Mughsail beach at the time the personnel of Common Operations Centre at Dhofar Governorate’s Police Headquarters continues with the search for the other four  people who went missing.

The search for four missing persons has focused on the areas of Al Mughsail and Raysut using advance diving and search equipment with the support of Royal Air Force of Oman (RAFO) and drones due to the difficult topography of the area, he added.

The various governorates of the Sultanate have seen rainfall from 7 to 12 July , wherein the search and rescue teams of ROP and the Civil Defence and Ambulance authority in cooperation with citizens managed to rescue over 40 people and to pick the bodies of 16 others, he said.

He said that most fatality incidents occurred  following the fading away of the direct impacts of the rains including two death cases due to a vehicle washed away , 11 death cases including six children due to drowning and an Asian family of six members washed away at Al Mughsail beach after they hit the protection fence,  the death of another expatriate on Raysut beach in Dhofar and the fall of a citizen from one of the mountains in the Wilayat of Al Hamra in Al Dakhiliyah Governorate.
Director General of Operations at Royal Oman Police urged citizens, residents and visitors to observe the safety instructions and avoid areas of risks and to keep an eye on their kids while at tourism sites and areas with high rainwater levels.