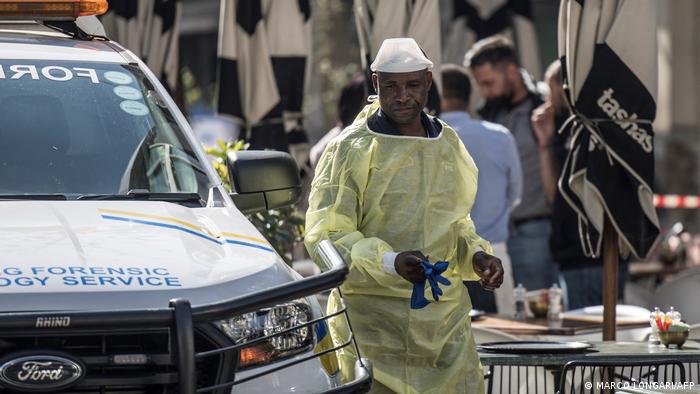 Gun crime is common by international standards in South Africa

Police reports indicate that a group of men arrived in a minibus taxi and started firing at the bar, prompting those inside to attempt to flee.

Gauteng province police commissioner Lt. Gen. Elias Mawel told the AP news agency that the police believed it was a group who attacked the premise from the number of cartridges found on the scene.

"You can see that a high caliber firearm was used and it was shooting randomly. You can see that every one of those people were struggling to get out of the tavern,'' Mawela told the AP.

He added that the motive behind the attack remained unknown.

"The primary investigation suggests that these people were enjoying themselves here, in a licensed tavern operating within the right hours," he said.

Those injured were taken to Chris Hani Baragwanath Hospital.

Gun crime is common by international standards in South Africa, with the country suffering a similar number of fatalities each year as a share of its population as the US does. Furthermore, in South Africa's case, a far higher proportion of these deaths are murder and a much smaller proportion are suicide than in the US. The country's overall homicide rate is also among the highest in the world, at 33 people per 100,000 inhabitants in 2020 figures, though it has fallen substantially this century.

The Saturday shooting comes shortly after the mysterious death of 21 young people at a township bar in the coastal South African town of East London. The causes behind their death, which has prompted much mourning and uproar, remains unknown, but with both a shooting and a stampede ruled out by investigators.