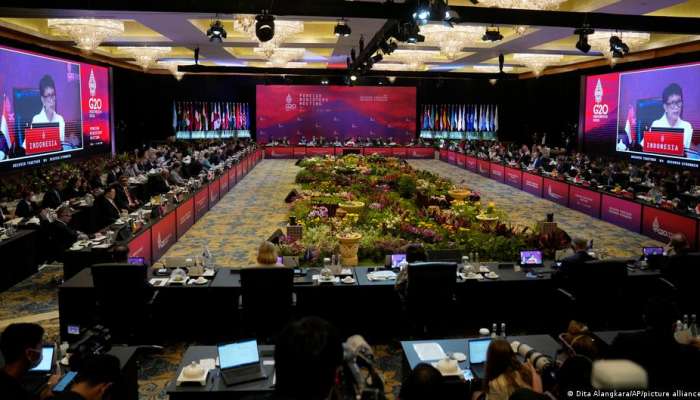 Bali: The foreign ministers of the Group of 20 (G20) countries are attending a joint summit on Friday on the Indonesian island of Bali, amid tensions between the West and Russia over Ukraine.

Indonesian Foreign Minister Retno Marsudi urged for a negotiated end to the war in Ukraine.

"It is our responsibility to end the war sooner than later and settle our differences at the negotiating table, not at the battlefield," Marsudi said at the opening of talks.

Marsudi added that it was important for Indonesia as the host to "create an atmosphere that's comfortable for everybody."

US Secretary of State Anthony Blinken made a direct appeal at the meeting of foreign ministers for Russia to unblock Ukraine's grain exports.

"Ukraine is not your country. Its grain is not your grain. Why are you blocking the ports? You should let the grain out," he said to Lavrov directly.

Blinken said said there had been widespread calls at the meeting urging Russia to end its war in Ukraine.

"What we've heard today already is a strong chorus from around the world — not just the United States but around the world about the need — for the aggression to end," Blinken told reporters on the sidelines of the talks in Bali.

Lavrov was not present in the afternoon, as Ukrainian Foreign Minister Dmytro Kuleba addressed the foreign ministers.

Several Western ministers, including German Foreign Minister Annalena Baerbock and Blinken, have ruled out meeting the Kremlin's top diplomat. They boycotted a dinner held on Thursday evening due to Lavrov's presence.

Reporter Andreas Kynast, from German broadcaster ZDF, said he had been the one to ask Lavrov the question, and was immediately thrown out by Indonesian security officials.

Lavrov said Western participants had "strayed almost immediately, as soon as they took the floor, to the frenzied criticism of the Russian Federation in connection with the situation in Ukraine."

"Everyone is telling us to put an end to the operation and reach a peaceful solution."

"Despite the behaviour of our Western colleagues, this is a useful discussion."

Lavrov added that Russia was is ready to negotiate with Ukraine and Turkey about grain but said it was unclear when such talks might take place.

The gathering as a whole was overshadowed by the shooting of former Japanese Prime Minister Shinzo Abe, who previously represented his country at a number of G20 summits.

China is Australia's largest trading partner, but relations have deteriorated in recent years after Canberra called for an investigation into the origins of COVID-19 and imposed a 5G network ban on Chinese firm Huawei. In response, Beijing imposed tariffs on Australian products including coal, seafood and wine.

"We don't believe those blockages are in our interests," she said, referring to Beijing's sanctions on Australian products. "We would say to China, they are not in China's interests."