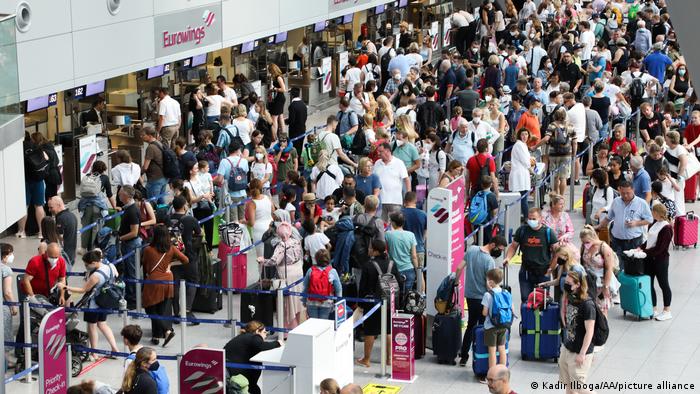 Amelie and her sister Amrei Quincke, from Essen in western Germany, were looking forward to a relaxing holiday in Budapest this summer.

Two days before they were due to depart for Hungary, however, Eurowings cancelled their flight. So instead, they were forced to catch a train to Budapest, as no alternative flights were available. These days, many holidaymakers are experiencing similar.

One reason for the flight cancellations are staff shortages at German airports. Some 7,200 vacant positions need to be filled, according to a study by the German Economic Institute. This is a result of many airport workers leaving the aviation industry during the pandemic and finding employment elsewhere.

With understaffed airports, holidaymakers are now facing countless flight cancellations and long queues at check-in and security. Germany's biggest carrier, Lufthansa, scrapped over 2,000 connections from Munich and Frankfurt airports this holiday season. An additional 900 bank holiday and weekend flights have been cancelled this July.
No staff shortages at Deutsche Bahn

Frankfurt airport, one of Germany's major aviation hubs, is not so fortunate. It is seeing a high volume of inbound and outgoing flights, almost on par with pre-pandemic levels. But it is struggling to cope. Authorities have begun recruiting additional staff, especially for ground handling. But even if this recruitment drive proves successful, many believe travelers will have to prepare for long waits at Frankfurt airport over the next few months anyway.

Poor working conditions are another reason for staff shortages. The airline Ryanair, for instance, does not comply with labor laws and court rulings to respect workers' rights, says the Spanish trade union USO. It has joined the Sitcpla union in calling for strikes, which will affect all of Europe.
Foreign workers to the rescue?

The German government is thinking about bringing in scores of foreign workers to compensate for these protracted staff shortages. So far, recruiting foreigners, or hiring Ukrainian refugees, has involved much paperwork in Germany.

The general manager of the German Airports Association, Ralph Beisel, welcomed the plan to bring in workers from abroad, saying talks are being held with individual businesses in the aviation industry so that baggage handling companies and airports can start hiring soon. Lufthansa, however, does not expect operations to normalize until 2023.
Labour shortages predate the pandemic

Germany's hospitality and catering industry, meanwhile, is even more short-staffed. Andrea Belegante, director of Germany's Catering Association, says this problem was already noticeable before the COVID-19 pandemic. The number of trainees in his industry has been falling steadily. To attract new staff, the industry organization has sought to establish standardized wages, additional work benefits and training deals.

Germany's Institute for Employment Research says the food-service industry has always been subject to staff fluctuations. If, however, companies fail to find people to fill these vacancies, companies will be left facing serious staff shortages on an ongoing basis.
Hospitality sector under pressure

The German Hotel and Restaurants Association, or DEHOGA, says recruiting new staff is currently the biggest challenge facing the industry. It says over 60% of businesses in the industry are looking to hire.

On top of this, the sector lost some €75 billion ($77 billion) in revenue between March 2020 and 2022, due to pandemic-related restrictions. The last thing hotels and restaurants need now is more uncertainty.

"Many companies will not survive a new round of restrictions and closures," says DEHOGA head Guido Zöllick. "Protecting companies and jobs must be a priority now."