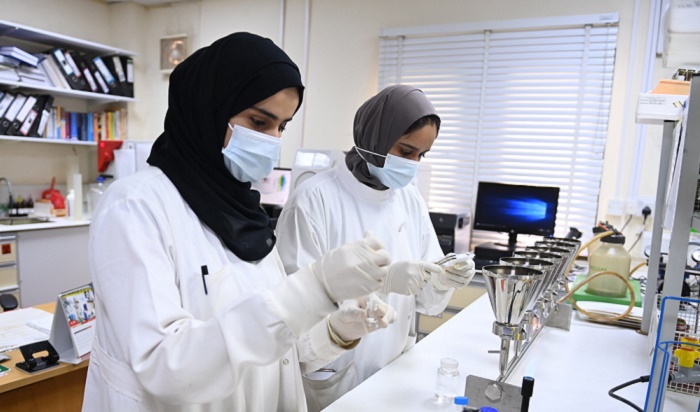 Muscat: Public health laboratories in Oman are considered the most important pillar of national security as they are the cornerstone of the disease investigation and surveillance system.

This was clearly evident during the coronavirus pandemic and its role in epidemiological preparedness and response, in addition to the great role played by global health laboratories in earlier years, including the pandemics that swept the world such as SARS virus in 2003, H1N1 swine flu and Middle East respiratory syndrome (MERS) virus.

Confirming the role of central laboratories, His Majesty Sultan Haitham bin Tarik, while chairing one of the meetings of the Supreme Committee tasked with tackling developments resulting from COVID-19 on 2 June 2020, ordered the establishment of a new laboratory for public health.

The move comes in the wake of technical developments and modern technical systems. The new central laboratory was geared to cater to the requirements during medical crises.

The Ministry of Health is seeking to establish an integrated modern building for the Central Public Health Laboratories with state-of-the-art diagnostic technologies and equipment.

The new building will contain a sophisticated level-3 safety laboratory for tuberculosis and other highly infectious viral diseases, a genome sequencing department, and other departments that will be developed as a neonatal screening department for metabolic disorders.

A cooperating centre
The World Health Organisation (WHO) has recently announced the selection of the Central Public Health Laboratories in the Sultanate of Oman as a cooperating centre in the field of emerging and novel infectious diseases.

It is the first of its kind in the Eastern Mediterranean region and the centre represents a new addition to Oman’s record of achievements in the health field.

The selection of the Central Public Health Laboratories in the Sultanate of Oman represents a significant milestone for the country, as the centre will serve the Eastern Mediterranean region and will play a global role along with other global centres.

The establishment of a collaborating centre for emerging and re-emerging diseases in the Sultanate of Oman provides an opportunity to share experiences and enables countries in the region and the world to benefit from Oman’s experience in the field of public health laboratories, such as providing technical consultations, organising training events and the response mechanism to the disorders.

The collaborating centre aims to enhance the country’s preparedness and response for timely laboratory detection and management of outbreaks of novel, emerging and dangerous pathogens.

It also aims to facilitate the transfer of safe and appropriate diagnostic techniques, practices and training in laboratories, as well as enhancing the technical capabilities of our public health laboratories to detect and report pathogens.

This is the first regional centre in this field, which confirms Oman’s leading role in many sectors and fields and the extent of its advancement and success in many health initiatives and programmes, whether at the local, regional or international levels that include confronting communicable diseases and combating the risk factors that cause them.

This qualifies Oman to be a model at the international level in the field of public health laboratories and in the areas of response and control of epidemics.

The Department of Public Health Laboratories enjoys a good international and regional reputation. The Sultanate of Oman periodically hosts many regional meetings, as well as many trainees from the Gulf Cooperation Council (GCC) and neighbouring countries for training in its laboratories.

Thirty-eight laboratories from different countries of the region are participating in the programme.

It has also become a WHO-accredited polio reference laboratory and regional coordinator for the PulsNetn Middle East network for food-borne disease surveillance since 2006.  Additionally, the laboratory was re-elected in 2018 to play the same role.

These laboratories are concerned with conducting a wide range of laboratory tests using different techniques to diagnose and monitor diseases, as well as conducting the necessary surveys to investigate the spread of associating microbes and toxins affecting public health.

She added that the Public Health Laboratories were recently declared as a global collaborative centre for the WHO for emerging diseases. The laboratory also includes several regional centres collaborating with the WHO that serve the countries of the Eastern Mediterranean Regional Office (EMRO).

Services during COVID-19 pandemic
Dr. Hanan pointed out that with the beginning of the COVID-19 pandemic, the National Centre for COVID-19 disease was established in the public health laboratories, and was entrusted with the diagnosis and monitoring of genomic mutations of the novel Coronavirus (COVID-19). Laboratories’ experts at the Ministry of Health analysed very large quantities of samples from hospitals and outpatient clinics. They numbered more than 1,000 samples per day at that time.

She said that the centre is still continuing to conduct COVID-19 tests.

The number of samples analysed at the centre since the beginning of the pandemic has reached approximately 276,000 samples, including 240,000 samples in 2020.

This, she added, confirms that the public health laboratories bore the major burden in diagnosing COVID-19 disease during the first year of the pandemic in the Sultanate of Oman.

Dr. Hanan further said that the experts in the public health laboratories in 2020 contributed to supporting the government and private sectors in terms of training, choosing types of solutions and giving an opinion on the design of private laboratories that are concerned with COVID-19 testing and then carrying out periodic inspection visits.

The experts also contributed to the selection of appropriate rapid testing devices that were later used in Ministry of Health hospitals and many private laboratories.

She pointed out that by providing the centre with advanced second-generation devices for genetic intrusion monitoring, the centre was able to provide information on emerging mutants of the COVID-19.

An agreement was recently concluded for the centre to provide genome sequencing services to a number of countries in the region.

She added that the National Reference Laboratory for Viral Haemorrhagic Fever Surveillance, which is responsible for the detection of Crimean-Congo haemorrhagic fever, Dengue Haemorrhagic Disease and Rift Valley Fever (RVF), contributed to monitoring the spread of dengue fever in a number of affected governorates in the Sultanate of Oman.

She also pointed out that the Central Public Health Laboratories also houses a reference laboratory for tests for surveillance of AIDS and acute viral hepatitis diseases, as well as rare and emerging diseases such as monkeypox.

Dr. Hanan explained that public health laboratories are concerned with providing quality testing services in medical laboratories in the Sultanate of Oman and the Eastern Mediterranean Region by organising the External Quality Assessment Scheme (EQAS).

The laboratories also provide many training programmes for national staff, as well as staff at the Eastern Mediterranean Regional Office (EMRO) in joint programmes, in conjunction with the WHO.

She said that at the national level, the laboratory participates in the Microbiology Training Programme of Oman Medical Specialty Board (OMSB) to train resident physicians in virology, bacteriology, tuberculosis and malaria.

The Virology Laboratory operates several lab surveillance and monitoring programmes for vaccine-preventable diseases or diseases that pose a threat to public health and require continuous monitoring.

These programmes include the regional and national poliovirus reference laboratory accredited by the WHO and EMRO for acute flaccid paralysis caused by poliovirus.

The laboratory serves the Sultanate of Oman and neighbouring countries, such as Yemen, Bahrain, Qatar and the United Arab Emirates. The laboratory recently monitored the outbreak of several cases of polio in Yemen and provides continuous services in this field.

In 2006, the regional and national reference laboratory for measles, mumps and rubella was accredited by the World Health Organisation (WHO) and the Regional Office for the Eastern Mediterranean (EMRO). This laboratory monitors fever and rashes caused by measles, rubella and mumps viruses.

In 2016, this laboratory conducted a measles and rubella serotyping survey. The findings of the survey led to the discovery of an immune gap of measles in the Omani society concentrated in some age groups, which resulted in outbreaks of measles in the Sultanate of Oman during the period from 2016 to 2017.

The division provides its services in the field of bacteriological diagnosis and determination of the serotype and genotype of bacterial pathogens.

While the Foodborne Disease Outbreaks Division investigates outbreaks of food-borne bacterial diseases, the division also performs microbiological testing of water from healthcare facilities, such as water used during dialysis and water from endoscopy division.

The division also monitors the Acid-Fast Bacilli (AFB) microscopy programme in other public health laboratories in Oman and provides training for employees.

The Chemistry Division analyses blood samples for levels of vitamins, copper and zinc. It also examines water samples received from dialysis units and endoscopy division to identify chemical specifications and levels of metals and heavy metals.

The Toxicology Laboratory conducts diagnostic tests and surveys by quantitative analysis of heavy metals in patients’ samples. It also examines the level of poisoning with pesticides and other toxins.

The Quality and Risk Management Division is involved in the implementation of the Regional External Quality Assurance Scheme (REQAS), which is an essential component of providing reliable and high-quality testing services in medical laboratories in the Middle East.

This is achieved by providing pre-defined simulated patient-like samples to various government and private microbiology laboratories in the country, as well as to the laboratories of the Eastern Mediterranean Region.

The Central Malaria Laboratory is responsible for organising regular training workshops for malaria microscopy services and managing the internal quality assurance programme for malaria known as cross-checking. The laboratory receives all positive microscope slides detected in the Sultanate of Oman and 10 percent of negative slides.

This laboratory is the first of its kind at the level of the Eastern Mediterranean region. This selection also represents a new addition to the record of the achievements of Oman’s Ministry of Health.

However, due to population growth, urban expansion and the development of means of transportation, in addition to the increase in interaction between humans and animals, the world has witnessed an increase in the incidence of emerging and re-emerging infectious diseases, and their spread across borders, making them one of the main causes of death worldwide.

Early detection of these diseases, which pose a threat to health, requires laboratories operating with appropriate levels of biosafety and have the ability to provide accurate diagnosis of emerging viral and bacterial pathogens.

Further, the successful detection, characterisation and tracing of these diseases require an effective system of public health laboratories, not only at the local and national levels, but also at the regional and international levels.

The Ministry of Health underscored the importance of developing Central Public Health Laboratories in the Sultanate of Oman.

Therefore, the Ministry strived to make these laboratories national reference centres and cooperative regional centres that provide the most accurate diagnostic analyses, to support disease surveillance and epidemiological investigation programs, in addition to being considered an advanced academic centre for qualifying national and regional cadres.

Among the most important tests that have been developed in the laboratory over the past years represented in many modern technologies and the development of many tests in the diagnostic fields, as well as in the areas of control and epidemic control, such as introducing the necessary techniques to examine the Zika virus, and the introduction of the MALDI-TOF technique to diagnose bacterial pathogens and fungi. HIV resistance sequencing tests have also been developed in public health laboratories.

Genexpert techniques have also been introduced to speed up the diagnosis of the causes of some diseases, such as tuberculosis and viral influenza.