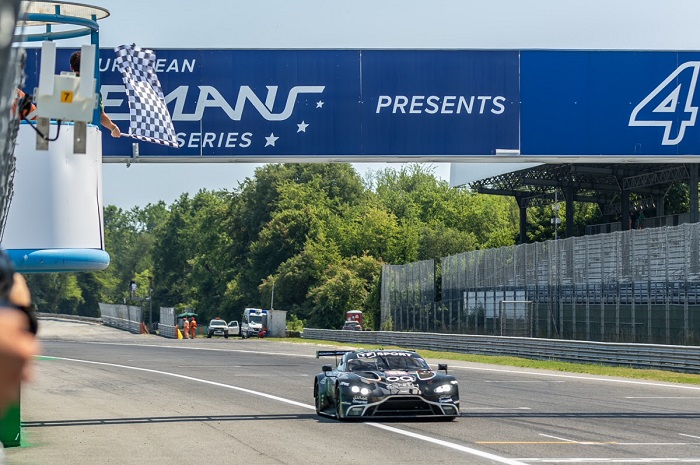 While expecting a difficult race after qualifying sixth fastest in LMGTE, even after extracting all he possibly could from the car, Al Harthy was still very surprised at just how perplexing the situation became in the race with the negative BOP and success ballast from the previous round.

Unable to battle on an even-footing with their rival Ferrari and Porsche entries, the Oman Racing team-mates, who headed into the third event of the European Le Mans Series campaign with the joint lead in the LMGTE championship, gave all they could but had to settle for ninth position.

“We had a good start, a good first lap, and then once things started settling down slightly we realised what we knew was the case for this race – it would be very difficult to race with the car lacking so much power”, reflected a disappointed Al Harthy, “Whatever we did and however perfectly we drove, we were going to struggle with the lack of performance due to the BOP.

“We all did drive perfectly well, our strategy was spot on, the teamwork was spot on, and Sam, Marco and myself all did a good job. These things happen to a certain degree in endurance racing sometimes but, in all honesty, they shouldn’t happen like this. We couldn’t compete, it’s as simple as that. I’m so disappointed because of all the incredibly hard work everyone puts in at Oman Racing.”

The Oman Ministry of Culture, Sports and Youth, OQ, Omantel and MHD-ITICS supported racer added: “This is the first time we’ve been put in a situation like this and I hope the organisers now look into it in a correct and fair way for the future. It’s all been very demoralising for us, but now I’m looking forward to going back to Barcelona for round four and fighting back there.”

Taking the opening stint of the race, Al Harthy made a good start to retain sixth in LMGTE but had a long battle ahead with the ballast laden and boost impeded Aston Martin a sitting duck at the end of the long Monza straights. Under pressure from the No.57 Ferrari early on, into the Rettifilo Chicane at the start of lap five the Oman Racing car had to cede position and dropped to seventh.

Edged back to eighth on lap seven by another of the Ferraris, the handicap placed on the Oman Racing car meant Al Harthy didn’t have the tools to even try and fight back. The rear of the Aston was also tagged at the start of lap eight, but he was able to continue without drama.

Then, on lap nine, a huge moment for Porsche driver Michael Fassbender as he exited Ascari triggered a heavy collision a split-second ahead of Al Harthy. Fortunately, the Oman Racing car was able to slice past on the right-hand side, as the multi-car impact was triggered on the left, and so Al Harthy moved back into sixth before the Safety Car was deployed with around 20 minutes elapsed.

Racing resumed 10 minutes later but the Safety Car was re-deployed soon after due to an excursion for an LMP3 car at the first chicane. Action re-started with almost 45 minutes gone, Al Harthy sixth and a couple of seconds behind the No.57 Ferrari, and he stayed within touch for the rest of the opening hour which concluded with another Safety Car after an accident at Ascari for an LMP2.

With the Safety Car still on track 15 minutes into hour two, Al Harthy headed to pitlane for his first refueling stop and remained behind the wheel for a double stint. Running ninth in LMGTE when the action resumed, one hour and 20 minutes elapsed, the Omani moved up into sixth again and made a second stop when a Full Course Yellow period came into force with 15 minutes left in hour two.

De Haan took over from the Omani and joined the race eighth in LMGTE. When racing got back underway he held position but as the halfway point of the race neared De Haan was edged back to ninth by the No.60 Ferrari. Another Safety Car period was required with 80 minutes to run and De Haan then made his pit-stop with less than 70 minutes to go.

Aston Martin factory driver Sorensen climbed aboard the No.69 car for the final stint and when the order settled he was 10th in LMGTE. No matter his abilities, there was little the Dane could do and after a late final pit-stop he took the chequered flag in 10th place. Post-race, though, the winning No.60 Ferrari was disqualified from the results and so the Oman Racing trio moved up into ninth.

There is now a lengthy eight week break in the European Le Mans Series calendar with round four of the championship taking place over the weekend 27th/28th August in Barcelona, Spain.