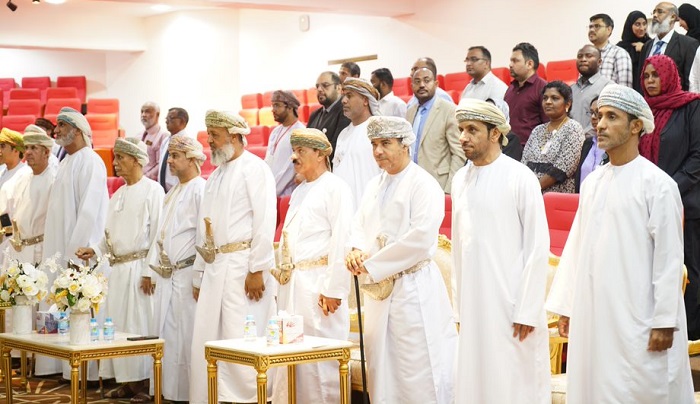 The University of Buraimi organises the first academic week which highlights its scientific and academic efforts and promotes books and research publications, as well as local and international scientific and community contributions and partnerships.

The opening ceremony, which was held in the Knowledge Hall on campus, was under the patronage of Sheikh Abdullah bin Salem bin Hamoud Al Farsi, Wali of Mahdah and in the presence of several governorate officials and a large audience of university members and guests.

Dr. Abood bin Hamad Al Sawafi, Vice Chancellor of the University, delivered a speech in which he spoke of the University’s scientific achievements at all levels. He noted that the employment rate of university graduates increased from nearly (12%) in the academic year 2019/2020 to more than (19%) in AY 2020/2021. Additionally, the satisfaction of employers with whom these graduates work has increased from approximately (87%) in AY 2019/2020 to nearly (93%) in AY 2020/21.

Moreover, the number of academic programs offered in the University’s various colleges has risen to 35 at master's, bachelor's and diploma levels.

Within the scope of governance and the consolidation of transparency and methodology, the number of academic policies and rules governing the university's various activities doubled in 2020/21 from two years earlier, reaching 52 academic policies.

Reinforcing quality particularly at the Center of Foundation Studies, which is the student's entry gateway to the academic field, the university has applied world-class standard tests, including Oxford Online English Placement Test and APTIS test-GFP Exit Test.

With respect to the university's cadre recruitment, and in the context of Omanisation efforts, Dr. Al Sawafi stated that the university has achieved a lot in Omanising academic positions, reaching more than 27% in the academic year 2020/21. The university takes pride in the fact that its executive leaders are distinguished Omani nationals.

Dr. Al Sawafi also pointed out that the University attaches great importance to community service, and is committed to providing the required support to the Omani youth in order to build a better future. The University has contributed - and will continue to make great contributions in several areas serving the community, including the development of architectural designs for a number of service projects, and the provision of innovative solutions, consultations and studies that benefit the community. The Vice Chancellor also reported that the number of activities and courses provided for community service increased from (35) activities during the AY 2019/2020 to (49) activities, workshops and training courses; and (9) engineering projects and designs, during the AY 2020/2021. One prominent example of the university's community service efforts, is its equipment of an outstanding e-learning hall in the Directorate General of Education in Al Buraimi governorate which is named (University of Buraimi E-Learning Hall).

The ceremony patron also awarded another engineering student team, which won the best research paper at the 11th National Symposium on Engineering Final Year Projects at Nizwa University. The project was entitled (The Use of Treated Medical Waste in Reinforcing Concrete), and the team was comprised of Aseela Mahmoud Al Naqbi, Balqees Saleh Al Shaybani, Buthaina Abdullah Al Badi, and Lamia Saeed Al Miqbali. The two teams were supervised by Dr. Ahmed Salaheddine Nasif of the Civil Engineering Program at the College of Engineering at University of Buraimi.

The patron then visited the academic exhibition at Mazoon Hall, which included examples of scientific research and books published regionally and internationally, as well as scholarly articles of the faculty in refereed journals, and students’ graduation projects.

Notably, the Academic Week includes a variety of lectures and carefully selected training workshops taking place on three consecutive days. Attendance at the events is open to the public, with Tuesday being dedicated to women only.