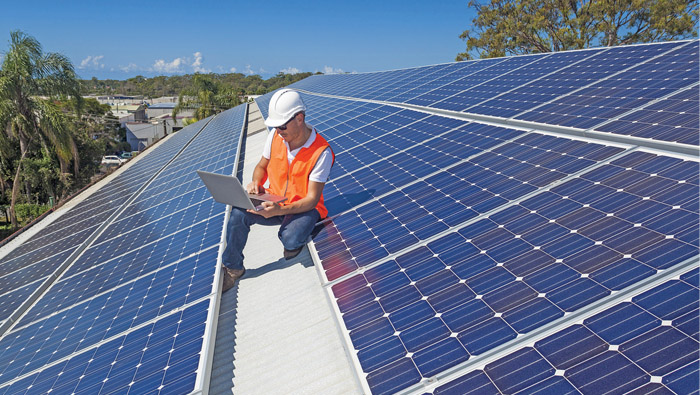 This article has been modified from the original which incorrectly stated that it would be half the houses in Oman, rather than Muscat.

Half of the houses in Muscat may sport a rooftop solar system to support their power demands in the next five years as Oman moves to diversify the economy, an official from Petroleum Development of Oman (PDO) said.
“In my view, when we fly over Muscat, 50 per cent of Omani houses will have solar panels installed in the next five years,” Raoul Restucci, managing director of PDO said while addressing the Omani business community at the Oman Economic Review Business Summit 2017.
“There is a technology revolution at our doorsteps. The cost of solar will go lower and there will be a tipping point for electric vehicles if a good storage technology is developed. Moreover, demand for these technologies is growing and it makes a perfect storm that will challenge the economic model of every country. We need to get on this transition train. Diversification is a must.”
In a conference held recently by the Nama Group, Christensen Flemming, senior project manager at Italian company CESI said solar energy is the cheapest source of electricity production in the country, not taking into account the subsidies granted by the government to individual users.
“It is an economically viable option, but first the government must make sure that the houses or any entity installing solar panels must be connected to the grid and what rates or incentives are they eligible for. Otherwise, due to lack of good storage technology, panels won’t work at night so these houses need an alternate power supply, which has to be supplied by the conventional power plant,” Fabio Scacciavilani, chief economist at the Oman Investment Fund (OIF) said on the idea of having half of the houses fitted with solar panels over the next five years.
Oman ranks one of the highest in the world in terms of solar irradiance or solar energy received per square kilometre, which makes shift to solar energy in the Sultanate inevitable.
Sahim initiative
“This can be possible if the regulations are good. The Sahim initiative should prove to be good enough for such a wide-scale implementation of solar energy,” said an official from Nafath Renewable Energy, an Omani alternate energy company that recently received two million rials in investment from Oman Investment Corporation (OIC).
Most residents believe it may be possible to put solar panels on their rooftops, but there has to be a push from both the public and private sectors.
“I have recently completed building my house and I am planning to install solar panels that are connected to the grid as it makes it cheaper in the long run, but most people are not thinking about it because awareness is less. Once this changes, the potential Oman has for solar is huge and we can expect this to be a reality in five years,” Ahmed Al Lawati, a resident of Sohar, said.
Oman’s Authority for Electricity Regulation (AER) launched the Sahim initiative earlier this year to allow solar rooftop installation for residents while being connected to the grid. According to a report by Moody’s, the cost of solar energy has declined by nearly 20 per cent since end of 2016.