Detergent in Oman’s waters could cause damage to marine ecosystems 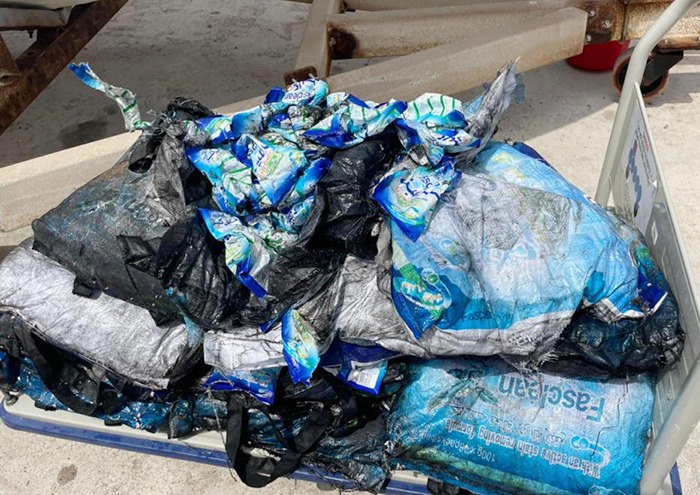 On Friday evening, many divers were shocked to find bags of detergent, many of which lay scattered on the beaches.

Muscat: Tens of thousands of bags of detergent that is currently accumulating off the coast of Muscat could cause extensive damage to the country’s marine life and ecosystems, say diving instructors in the country.

A circular issued by Oman’s Environment Authority said: “Specialists at the Environment Authority conducted a field survey of those beaches and assessed the environmental situation in the regional waters to ensure that they were not affected by pollution. The authority also coordinated with the relevant authorities to join efforts and work to remove waste and clean the beaches to return them to their normal state.”

On Friday evening, many divers who were out exploring the seas with friends, or leading tour groups out into water, came across a number of bags that birds were trying to get into. While they initially thought they were buoys left by local fishermen, they were shocked to find that these were actually bags of detergent, many of which lay scattered across the water.

“The detergent has spread as far from Barka in the north to Quriyat in the south, and all the way up to the Daymaniyat Islands,” said Abdullah Al Maskari, a diving instructor in Oman. “You can imagine just how far it has spread. The detergent is going to cause huge damage to our ocean ecosystems, so we need to act fast to remove as much of it as possible.

“Turtles and other marine animals will look at these bags and think they are jellyfish, because that makes up a part of their food, and they will attempt to eat these bags,” he added. “This is going to cause a lot of problems for them. Furthermore, they could affect the coral formations in the sea, and this could have very adverse consequences.”

Maskari explained that most marine animals lay their eggs in coral beds that form the bedrock of their life cycles. What’s more is that corals lessen the impact of natural disasters such as hurricanes and storms. “Corals aren’t just there to look pretty…they are actually extremely important to our ecosystems,” he said. “Life in the oceans begins in coral beds. Many private citizens and divers out in the ocean have come across these bags and have picked up whatever they can see, but more action needs to be taken to clean up the spill as soon as possible.

“We don’t know the exact number of detergent bags at sea, but it is safe to say that they number in tens of thousands,” Al Maskari said. “The detergent packets were stored in bigger packs, which when split open released hundreds of smaller ones, almost like a cluster bomb, and that magnifies their damage.

“The best way to clean up the detergent would be to allow these packets come to the shores. They would make for unpleasant pictures, but it would be easiest to clean them up that way,” he added. “Once they mix in with the water and the ocean has claimed it, it is going to be harder to clean up.”

According to the journal, ‘Environment Science and Pollution Research’ that is published by the European Chemical Society’s Division of Chemistry and the Environment, detergent as a pollutant has serious risks to natural ecosystems.

Harmful effects of detergents include eutrophication, which is when the environment becomes enriched with nutrients, leading to more plant and algal growth, which in turn leads to competition for oxygen by marine species; foaming, which could be an indicator of excessive toxins; and the altering of key parameters such as temperature, salinity, turbidity, and pH levels, which are critical to the marine organisms that inhabit aquatic environments.

“Therefore, production of environment-friendly detergent is an important issue around the world,” said Seyyed Alireza Mousavi and Farank Khodadoost in their article in the journal.

This was a viewpoint shared by Neil Abbot, a diving officer at PDO’s dive club, who first came across plenty of bags when he was exploring the seas off Muscat and heading to the Daymaniyat Islands with a friend on Friday evening.

“Many of the bags had barnacles attached to them, which meant they had been underwater for quite some time,” he said. “As we continued our journey, we saw more bags float to the surface of the water. There were probably 100 floating bags, but even worse was when the bags had split open; it was like a minefield.”

“When diving at a site known as Black Top Reef, we started to find bags on the bottom broken open,” he recalled.

“I don’t know what all this washing powder will do to the fish let alone the plastic to turtles, whale sharks, etc.”

Neil and his team recently pulled out a load of detergent bags at Al Fahal Island, and urged others who go out to sea to clean up as much of the spill as they could. He was also afraid of the effect this could have on the livelihoods of fishermen, as well as those who eat their catch.