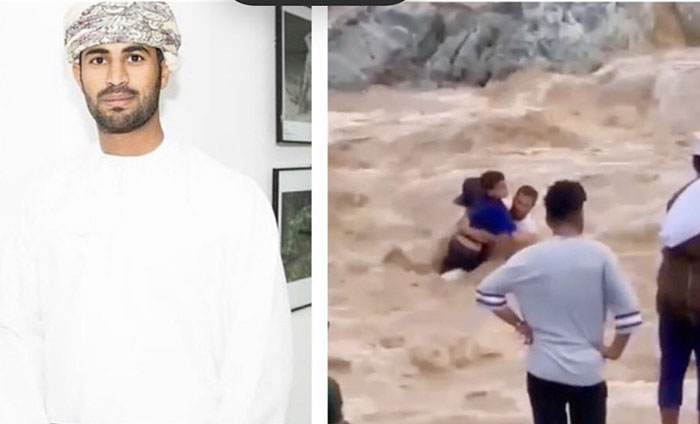 Muscat:  A citizen from Al Dakhiliyah Governorate risked his life to save two children from a flash flood in Wadi Bahla on Friday.

Moments back Ali bin Nasser Al-Wardi had little inkling of the impending disaster when he was sitting along with his father in his house and talking about the rains. He even asked his father to go out in the rains and enjoy the beautiful scenery that Wadi Bahla presented at the very beginning of the khareef season.

On his persistence, the father-son duo went out and what they saw only moments later was chilling. The two children were helplessly into the lap of the fast-flowing wadi and without his intervention, there was little chance of them coming out of this ordeal.

The two children were carrying with them rickety pieces of palm tree trunks in the hope, perhaps, that this would provide them a life chance. It was then that Al Wardi’s roared above the waves, ‘O Ali, tie a rope around your waist. Another citizen who was closeby shouted: “I have a rope and I will bring it to you right away.”

So I took off my dishdasha, and my father tied the rope around my waist, one end of which was tightly held by my father.”
Al Wardi said he was only thinking of saving the two children from the icy jaws of death and was fervently praying to God to help him save the two little children.

Al Wardi continues: “I was resisting the force of the flow and shouting out to the children at the top of my voice asking them not to panic and look around them for anything stable: either a pillar or a tree to hold on to, but to no avail.  I somehow reached them and as soon as I touched them, tears began rolling out of their eyes. I hugged them, I comforted them asking them all the while not to worry. I will carry you out of the valley, but the younger child, perhaps unsure about my assurances blurted out: “I don’t want to drown and die, please save me.”

While coming out, Al Wardi was a sight to behold. A frail-looking man in the backdrop of mighty waves, swimming against raging tides and holding on to his dear life in the form of two little children.

Ali’s father and a group of citizens who had collected by then, pulled the rope until Ali reached the bank, holding dearly to his trophy—the two children.

“A number of institutions and associations have thanked me for the work done by me. “The Police Command of Al Dakhiliyah Governorate thanked me via a phone call.  The Shura member His Excellency Mohammed Al Hina’ai, representative of the Wilayat of Bahla, and a number of government, charitable and media associations and institutions have expressed their gratitude to me, Al-Wardi further added.”