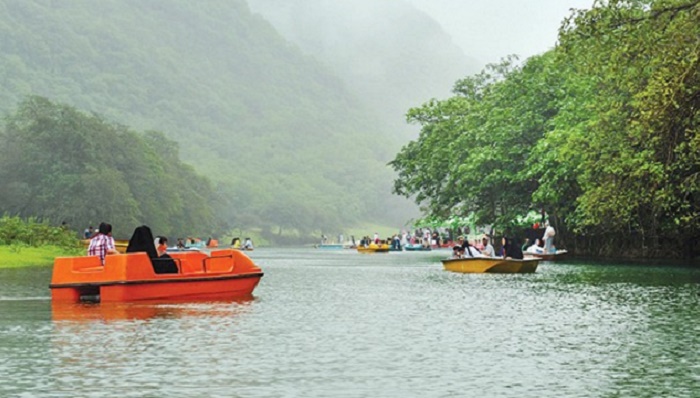 The Khareef season began yesterday and will continue until 21 September, 2022.

Salalah: Cool breezes, refreshing rains and greenery as far as the eye can see are what tourists who visit Salalah and the Dhofar region are in for when they visit the southern part of Oman this summer.

The Khareef season began yesterday and is set to run until 21 September, 2022, bringing with it the promise of tourists from Oman, the rest of the Gulf region, and from around the world, as people flock to Salalah to experience the unique climate during this time of the year, while the rest of the Middle East swelters under temperatures of 45 degrees and above.

Waterfalls
The near-continuous rainfall gives rise to many waterfalls formed by flowing waters that cascade down the green slopes of the mountain ranges that form Salalah’s northern natural border. These natural wonders are among the main tourist attractions for people who come to the Dhofari capital.

Among the most popular waterfalls are Ayn Razat, Ayn Jarziz, and the waterfalls of Wadi Darbat, in whose pristine, clear blue waters people often enjoy boat rides and are not afraid to swim to their heart’s content.

Preparation
As part of the region’s preparations for the tourist season, the Office of the Governor of Dhofar held a meeting to find out whether the relevant organisations are ready to receive tourists from inside and outside Oman, and to discuss the promotion and upgrade of public services and roads, as well as the preparations undertaken by hotels to accommodate the visitors.

The activities of this year’s Khareef season will be held across several locations, including several parks and tourist areas in the region.

The Directorate General of Heritage and Tourism in Dhofar continues its efforts in cooperation with tourism partners from various government and private sectors to make the season a success and promote and upgrade tourism services.

The Directorate General of Commerce, Industry and Investment Promotion in Dhofar province has also completed its readiness for this year’s Khareef season in cooperation with government and private agencies involved in the provision of goods and food services, strengthen the services offered by commercial banks, enhance the quantities of fuel at stations, and increase the efficiency of their services.

Assistance
The Royal Oman Police will also play a prominent role in keeping up with the Khareef tourist season by providing assistance, guidance and awareness services on the roads for those coming to Dhofar.

During the tourist season, the Dhofar Provincial Police Command deploys traffic and security patrols at all event sites and roads leading to them, with the aim of regulating traffic and preventing traffic jams.

The civil defence, ambulance and Coast Guard services are also deploying patrols both by the seashore and further inland in the governorate, with the aim of raising awareness and following up on reports of drowning and accidents in these places.

Dhofar governorate has many natural tourist attractions due to its diverse marine, agricultural, mountain and desert terrain, as well as archaeological and historical sites listed on the UNESCO list of World Heritages.

Among the most important locations are Al Baleed Archaeological Park, the Museum of the Land of Frankincense, Sultan Qaboos Youth Complex for Culture and Recreation in Salalah, and the historic forts in the wilayats of Rakhyut and Mirbat, among others.