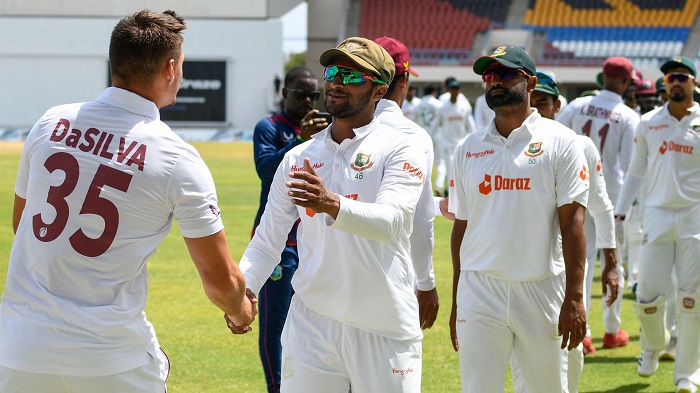 St John's : Pacer Kemar Roach and captain Kraigg Brathwaite shined for West Indies, helping them seal a seven-wicket win over Bangladesh in the first Test of the two-match series at Sir Vivian Richards Stadium in Antigua on Sunday.

It was a memorable outing for the Windies, outplaying Bangladesh in all departments. With this win, they have taken a 1-0 lead in the series. Chasing a target of 84, Windies lost captain Kraigg Brathwaite and Raymon Reifer for single-digit scores in the second over. All-rounder Nkrumah Bonner was dismissed next for a duck, sinking WI to 9/3.

John Campbell and Jermaine Blackwood took control of the West Indies innings next. The duo ensured that their side achieved the target without any further hiccup by seven wickets. Campbell finished with an unbeaten 58 while Blackwood with 26.

Put to bat first by West Indies, Bangladesh were bundled out for just 103, with skipper Shakib Al Hasan (51) posting an important half-century and Tamim Iqbal (29) posting some useful runs to prevent absolute humiliation for their side. Pacers Jayden Seales (3/33) and Alzarri Joseph (3/33) were the stars for the Windies with the ball.

In the second innings, WI was bundled out for 265/10, pushing them 162 runs ahead in the match. Captain K Brathwaite (94) and Blackwood (63) played powerful knocks that drove their side to a solid lead.

Bangladesh in the third innings were dismissed for 245/10. Shakib Al Hasan (63), wicketkeeper-batter Nurul Hasan (64) and Mahmudul Hasan Joy (42) delivered solid contributions for their side, though not enough to ensure a solid lead for their side. Bangladesh could only attain a lead of 83 runs, giving WI a target of 84 runs which they chased down comfortably.