The Solitary Star (In celebration of Father's Day) 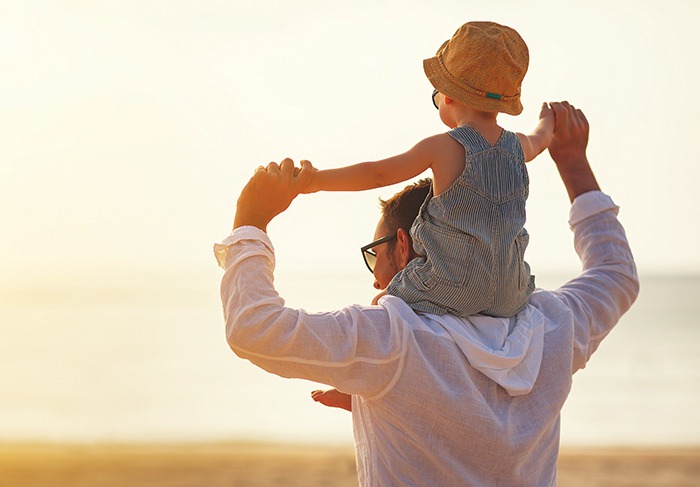 The supermarket was one place that my wife revered like a saint’s tomb and once inside, she was almost always in a meditative trance and lost to the world outside as she combed through the racks for various brands and special offers. Her meticulousness often resulted in my elevated blood pressure, as by nature I was restless and highly susceptible to boredom - a trait, which my five-year-old daughter had inherited impeccably, much to my wife’s disappointment.

The weekly supermarket visit on Fridays often took its toll on the rest of the evening as heated arguments, harangues and sober weekends followed in natural progression. My daughter often found herself playing referee (favorably to me most of the times) during the bouts. Things got a little out of hand after one such volatile supermarket visit, and my wife suggested that the next time around, I drop her at the supermarket and take my daughter to the beach nearby while she shopped in peace. And for a change, I found myself in total compliance. And thus began our weekly trips to the seashore.

The beach was barely a two-minute drive from the supermarket. It was a quiet beach with not very many people around. I would park my car under a coconut tree in one of the secluded spots in the beach. I would push back my car seat, open the door and sip a can of chilled coke while enjoying the cool breeze and the music on my car radio.

My daughter would be busy spotting crabs and collecting seashells. But as I said before, she had inherited her vulnerability to boredom from me and it was only a matter of couple of weeks before she got bored of crabs and seashells. .When she got bored, her guns were always aimed at me.

“Daddy, why is the sea so blue?” She would ask.

“Because the grass is green.” would be my dry and obvious answer.

“But daddy, why is the grass so green?”

“Because the sky is so high”

“But tell me daddy, why is the sky so high?”

The rhyming answer was good enough for her to switch her pestering tactics. She would start tugging at my chin, begging me to tell her a story,.. “Daddy, tell me a story, pleeeease tell me story,…a veeeerrrry long story,…the story should be a little scary…, a little sad,…a little happy,…a little funny… and one more thing…you should be the hero of the story!”

And soon she would be in her elements as she made me slay dragons and monsters, rescue little children trapped in caves, ride on a winged horse and so on. She would give me no break and I had to think up a new story every time, as she would be in ‘hyper alert’ mode to check if I dared to get repetitive. This continued for a few weeks and soon, I was running out of creativity. I had to think of an alternate way to keep her occupied for those ninety minutes that my wife went on a supermarket pilgrimage.

Then one evening I had an idea. I challenged her to count the number of waves that came rolling on to the shore. The idea excited her as she started counting. That left me a little in peace while I enjoyed the serenity of nature (and the coke) undisturbed. Or so I thought. Soon she was counting in high decibels… “Hundred and seven, hundred and eight…daddy what comes after hundred and eight?”

“Hundred and nine”, I would reply.

“Daddy, what comes after hundred and nine?”

“Daddy, what comes after hundred and ten?”

And soon I realized that I was the one counting.

This was not working. Suddenly the supermarket seemed like a better option.

But my pride wouldn’t allow me to admit that. I decided to take it week by week. The following Friday, it was around dusk time as we drove to the beach. The sea looked tranquil as the waves gently slapped against the shore. I parked the car at the usual place and took out my can of coke. She was surprisingly quiet as she sucked her thumb, looking lost in some deep thought. But somehow, her quietness always alerted me like the calm before a storm.

“What are you thinking, baby?” I asked.

“Daddy…I’m just thinking of ‘what to think’?”

Oh no! Now I had to think faster as to what to make her think before the devil entered the workshop.

“Do you know something baby?” I asked.

“Do you know that there are more stars in the sky than there are sea shells in all the beaches of the world put together?”

“How many sea shells are there in all the beaches, daddy?”

“But you must know daddy? How can you not know? You are supposed to know. I know that you know everything.”

“Because you are bestest daddy in the wholest world!”

“Well okay, there are one million twenty thousand four hundred and seventy eight sea shells in the all the beaches of the world.”

“And how many stars are there in the sky?”

“Daddy…don’t fool me. How do you know so correctly?”

“Because you just said that I’m the bestest daddy in the wholest world…and so I know everything.”

Suddenly I was confused. I wasn’t sure who was kidding whom.

“Well, if you don’t believe me, you can count the stars yourself. If you are right and I’m wrong, then I will tell you two new stories. If you are wrong and I’m correct, then no ‘story telling’ for two weeks. Is that a deal?” I asked lifting my thumb.

“Deal daddy.” She said, lifting her thumb in excitement.

“But remember, you must not miss out a single star.” I said.

“Ok daddy.” She said as she got down from the car to count the stars. That was a relief. I leaned back on my seat and switched on the radio. Just when I was about to open my coke, she came back to me with a glee.

“Daddy, you have lost. There is only one star in the sky.” She said triumphantly.

Now, that was a rude interruption.

“That can’t be baby. Look properly.”

“No daddy, I counted properly. There is only one star. Come out and look for yourself.”

I stepped out of the car and looked at the sky. She was right. There was just a solitary lustrous star that shimmered in the dark expansive sky. The clouds probably hid the others. And suddenly it seemed to me that it was longing for our invitation to join our little twosome beach party. The star reminded me of my younger days that were woven in a world of dreams and wishes. My elder sister used to tell me that a solitary star in the sky answers our heart’s deepest wishes.

All we had to do was ask for it. There were a few occasions during my growing years when I had spotted a solitary star and made my wish. The nature of the wish kept changing with time. A tricycle, scoring high marks in an exam, a motorcycle, getting through a job interview, getting a promotion, winning someone’s heart… etc. were all wishes made during my solitary star spotting over the years. Amazingly, none of these wishes I made came true. Even more amazing was the fact that I never stopped making those wishes as I felt that if it didn’t happen, let it not be for the want of wishing. After all, making a wish never invited tax.

I lifted my daughter and put her on the bonnet of the car. I told her “Sweetheart, do you know, the stars are always watching us? They are our guardian angels. The grace of our forefathers shines on us through the stars….”

“Not f-o-u-r ‘four’ you nut, its f-o-r-e ‘fore’…forefathers…that means our grand father, great grand father and so on…”

She spent a moment in thoughtful silence.

Then she took off again, “Daddy, … what comes after great grand father?”

“Well, okay…” I cut her short, “right now, we’re not discussing grandfathers. We’re talking about the stars. So now, coming back to the stars,… you know, sometimes, one of them appears in the sky alone. It is said that if you make your wish to it, it will bless you by making your wish come true. So this is your chance. Go ahead and make your wish and ask that lonely star to fulfill it.”

She stared at me with wonder and asked, “Reeaallly daddy?”

She looked up at the star and then looked at me again.

“Will it answer annnyyy wish?” she asked with her eyes wide open and a tilt of her head.

“Yes. All you got to do is ask.” I said, while trying to guess what her little mind was working on - ice creams…candy… a new dress… a new video game…a visit to the amusement park…. a story book… first prize in the ‘tiny tots’ dance contest in her school…or an evening of uninterrupted cartoon network viewing on the TV without studies… what could it be that took priority in her tiny brain?

She once again looked up and gazed at the star for a long time. She closed her eyes, folded her palms and maintained intense silence for a few seconds. I was amused. She then opened her eyes slowly while I watched her performance in fascination trying hard to conceal a smile that came to my lips. Then with a sense of achievement she said, “I’ve made my wish, daddy.”

“Very good,” I said, “now let’s get you back into the car or you may catch a cold.” The air was getting chill. I carried her and put her in her seat. “And by the way, what did you wish for, baby?” I asked while folding a woolen scarf around her ears.

“Shall I tell you daddy?”

“I wished that all the other stars appear on the sky because that poor star must be feeling lonely and scared all alone.”

For a moment, I stood there staring at her, not believing what I had just heard as she looked at me in all innocence. Suddenly her eyes lit up as she looked behind me. “Daddy, look...!!” she screamed, pointing her tiny fingers skywards.

I turned and looked at the sky and up there I saw…the clouds had paved way as stars, glittering like diamonds, filled the evening sky and along with them was ‘uncle’ moon with his round and happy face,… all of them dutifully gathered in a celestial assembly… just to honour my little princess’ wish… which was their Royal Command!

(The author is an International Award winner and an executive staff of Muscat Media Group. This short story is an extract from his book “The ‘Capillary’ Effect & Other Short Stories" published on Amazon Kindle)