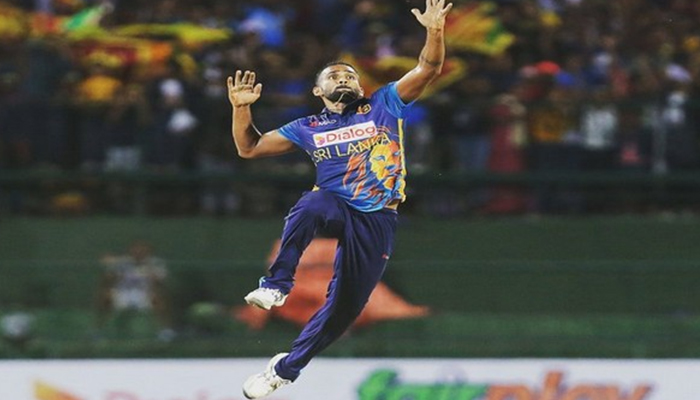 Pallekele : After registering a 26-run win against Australia in the second ODI of the five-match series, Sri Lanka skipper Dasun Shanaka lavished praise on pacer Chamika Karunaratne and called him a 'born warrior'.

Three-wicket haul by Karunaratne, which was followed by two wickets each by Dushmantha Chameera, Dhananjaya de Silva, and Dunith Wellalage, helped Sri Lanka to restrict Australia at 189 and register a victory by 26 runs, in the second ODI, here at Pallekele International Cricket Stadium on Thursday.

"The Australians bowled really well up front. We were a few runs short. But when we went onto the field, I had a feeling and the trust that our bowlers would defend. On wickets like this, we knew it would turn. We didn't take the right options with the bat and we need to come up with the right options in the next game," said Shanaka in a post-match presentation.

"Chamika is a born warrior. He delivers whenever I throw the ball to him. Same with Dushmantha as well. Even on the field the attitude and the concentration is top class. At last, I must thank the crowd," he added.

Put to bat first, Sri Lanka had a mediocre outing and could manage only 220 runs at a loss of nine wickets, after their innings got cut short by 2.2 overs due to rain. Pat Cummins was the pick among the bowlers from Australia as he scalped four wickets, while Glenn Maxwell and Matthew Kuhnemann took two wickets each.
In the second innings, the target got revised to 216 in 43 overs. Australia were never able to get par at Sri Lanka's score and got bundled out at 189. David Warner and Glenn Maxwell were the only batters who could manage a 30 and 30 plus score.

The five-match ODI series now stands at 1-1. Both the teams will be squaring off for the third ODI on Sunday at R Premadasa Stadium, Colombo. (